Template Run has been a huge success for the iPhone and iPad, but now Dream Bot Studios is releasing a new free iphone game to play. A silly 3d arcade style flicking game in the back of a movie theater. 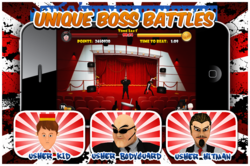 A new iPhone and iPad game has been released to help keep the fun going after the huge success from titles like Temple Run, Temple Run 2, and other great endless runners.

The CEO Markus Skupeika explains, "You can't help, but laugh when you throw toilet paper at a Movie Goer and it wraps all around them... causing the Movie Goer start walking like a zombie.

At that point, you can pile up combos to get that movie goer so annoyed they leave the theater and call in the Usher.

And that's when the boss battle begins!

You and the Usher, a battle to be remembered. Players will have to flick multiple candies and weapons each with special abilities and combo abilities.

A hilarious and funny game where you throw candy from the back of the theater as fast as you can to clear out the theater. After the theater is cleared, players can battle it out with unique usher boss battles."

This new free iPhone game is now available on the Apple App Store for a limited time after it's price drop from $4.99 to $0. The CEO explains Dream Bot Studios would like mobile gamers to have the a no cost entry to experience how Dream Bot Studios develops it's fun and addictive games.

If any iPhone or iPad gamers wish to play Flicked Off At The Movies, one can download it now, free for a limited time on the app store.