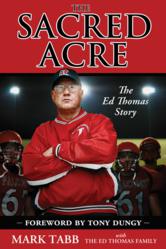 I want my legacy to be that I wasn’t just a football coach but a man who tried to live a Christian life and impact others. --Ed Thomas

Zondervan announces the publication date for "The Sacred Acre: The Ed Thomas Story" as August 16, 2011. The book details the tragic events starting in 2008 when a massive tornado hit Parkersburg, Iowa, followed a year later by the murder of beloved high school football coach Ed Thomas -- events that rocked this small Midwestern town. Authored by the Ed Thomas family and Mark Tabb, "The Sacred Acre" reveals how the power of hope fueled by an extraordinary example of forgiveness inspired not only the residents of Parkersburg but people across the country.

Shortly after the tornado Thomas famously declared: “God willing, we will play our first home game here on this field this season.” More than a coach, Thomas was a church elder, mentor to students and players, and community leader, who rallied residents around a vision to restore the town, starting with the football field. A catalyst for the collective rebuilding effort, Thomas inspired the town with his personal example -- continuing to excel at his routine work while humbly pouring hundreds of hours into the rebuilding initiative. Just 100 days following the disaster, the Aplington–Parkersburg Falcons won their first home game of the season on the field dubbed “The Sacred Acre.” More than a mere football game, it served as a galvanizing point for the town to band together and rebuild.

Just as Parkersburg began to pick up the pieces, tragedy struck again when Coach Thomas was gunned down by a former student and football player at the school. The sensational murder made national news headlines. Now, the full story of the family’s and community’s faith and forgiveness is revealed in "The Sacred Acre."

Tony Dungy will write the foreword of the book. A special event at the school is being planned to honor Ed Thomas’s memory -- as the town, former players and special guests join together for a celebration. Details are coming soon.

Zondervan is the world's leading Christian publisher of books whose authors are noted for their excellence in the craft of writing as well as their worthy contribution to the ongoing global evangelical conversation. The works published by Zondervan not only confirm readers’ faith and understanding, they also challenge and stretch readers’ thinking. For more than 75 years, Zondervan has delivered transformational Christian experiences through general, ministry and academic resources by influential leaders and emerging voices, and been honored with more Christian Book Awards than any other publisher. Headquartered in Grand Rapids, Mich., Zondervan publishes bestselling books, audio, video, curriculum, software, and digital products in such categories as biblical languages and studies, biography, business, contemporary issues, counseling, cultural, devotional, evangelism, family, fiction, history, inspiration, leadership, ministry, pastoral, personal development, prayer, philosophy, reference, relationships, textbooks, theology, youth and more. Zondervan resources are sold worldwide through retail stores, online and by Zondervan ChurchSource, and are translated into nearly 200 languages in more than 60 countries. Visit Zondervan Books on the Internet at http://www.zondervan.com/books.