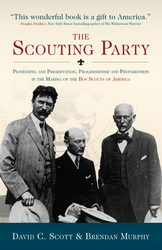 Forget everything you thought you knew about the Boy Scouts of America. When the Scouts began, Teddy Roosevelt bestrode a fast-changing political, environmental and social landscape, not unlike our own. An international cadre of strong-minded and often conflicting individuals launched BSA during the Progressive Era when “TR” presided over America 100 years ago.

Incorporated in Washington, D.C. by Chicago publisher William Dickson Boyce in February 1910, Boy Scouts of America gained its organizational footing in New York City, epicenter of the industrial and social reform movements correcting the excesses of the Gilded Age. Though BSA was based on the English Scouting movement of retired Boer War hero Gen. Robert Baden-Powell, BSA owed much to the pioneering work of naturalist-artist-writer Ernest Thompson Seton and illustrator-writer Daniel Carter Beard, who feuded often and at times bitterly over who should be credited with founding Scouting.

Seton, familiar to Americans for his best-selling book “Wild Animals I Have Known” and his vivid lectures on wildlife, found himself increasingly at odds with BSA management from 1910-1915 over issues of organizational philosophy. But Beard, an illustrator of Mark Twain novels including “A Connecticut Yankee in King Arthur’s Court,” found his place within BSA as an icon of American Scouting, beloved to young Scouts as “Uncle Dan” Beard.

A groundbreaking new account of the origins of Scouting and the first years of the Boy Scouts of America reveals the internal strife among the men who gave shape to the movement in America. "The Scouting Party" by David C. Scott and Brendan Murphy “is a gift to America,” says historian Douglas Brinkley, author of “The Wilderness Warrior: Theodore Roosevelt and the Crusade for America.” The story is “fundamentally and uniquely American,” adds Candice Millard, author of “The River of Doubt: Theodore Roosevelt’s Darkest Journey.” Co-authors Scott and Murphy “deserve merit badges in human and fair-play” for their handling of the egos at the center of the tale, comments Patricia O’Toole, author of “When Trumpets Call: Theodore Roosevelt after the White House.”

Other insights from “The Scouting Party: Pioneering & Preservation, Progressivism & Preparedness”:

Keynoter and “Scouting Party” co-author David C. Scott (TX) is an avid student of the worldwide Scouting movement and the author of a book on Scouting & Theodore Roosevelt. Former UPI correspondent Brendan Murphy (D.C.) coordinates the Voice of America Zimbabwe and is the author of two books on the Second World War in France.