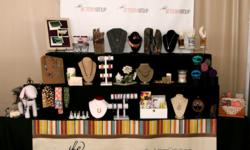 "Whenever I open The Artisan Group's gift bags, it's like Christmas!"
-- Tinsel Korey

Celebrities and press stopping by The Artisan Group (http://www.theartisangroup.org) display at GBK’s Luxury Gifting Suite for the MTV Movie Awards on June 1-2 at the L’Ermitage Hotel in Beverly Hills got a glimpse of the best of the handcrafted movement and took home swag bags filled with goods from independent artisans working in the United States and internationally.

“The Artisan Group is about representing the handcrafted movement to Hollywood,” said founder Valerie Guerrero. “Celebrities have plenty of opportunity to receive manufactured luxury goods and that’s great but we want to introduce them to the best of the best being created by small, artisan-owned businesses.”

To ensure products are up to the standards of the luxury-oriented GBK gift lounges, The Artisan Group reviews and approves all work to be included in the swag bags. This is in addition to the fact that membership is juried and by invitation only. “Our membership is exclusive,” commented Guerrero, “but you will not find a friendlier, more knowledgeable and supportive group of individuals—they are aware of how difficult it is to make an impression in a heavily saturated market and at the same time know that succeeding can change lives for the better and want to see that happen for each other. Actually, it’s extraordinary.”

“The Artisan Group loves participating in GBK’s MTV Movie Awards Gift Lounge,” said Guerrero. “The vibe is hip and cool and the attendees are appreciative of the treasures they receive. Our artisans get a lot of thank you notes from the celebrities via Twitter and Facebook, and it’s not uncommon for purchases to happen post event and months down the road.”

Sometimes the feedback is immediate. A notable moment occurred this year when James Manos, Jr., creator of the Showtime hit "Dexter," visited The Artisan Group's exhibit. He was so taken by designer Amy Fine’s necklace display that he wanted to know if he could have it for his wife. “It turned out his wife happened to be Lauren Velez, who plays Captain Maria LaGuerta on the show!” laughed Guerrero. “Lauren fell in love with Amy’s necklace too and we phoned Amy to see if it was okay for her to have it. Amy agreed and Lauren told me she would actually be wearing the piece in an upcoming episode of the show.”

Celebrity Judith Shekoni of "The Twilight Saga: Breaking Dawn, Part II" also loved the gifts she received and emailed a note of thanks saying, "Just wanted to extend a thanks to all the people you represent and to let you know I will do my best to wear your pieces at red carpets and events to raise the profile of your gifted artists."

The Artisan Group also gifted GBK’s 2012 charity beneficiary, (RED)™—a non-profit organization created by Bono and Bobby Shriver to unite iconic companies and consumer power in the fight against AIDS in Africa. “Our artisans are generous of spirit and are happy to give to this important cause,” noted Guerrero.

Photos of the display pieces and contact information for all participants are available in The Artisan Group’s official "MTV Movie Awards Event Guide."

About The Artisan Group
The Artisan Group (http://www.theartisangroup.org) is an art promotions group representing talented artisans at Hollywood’s best celebrity gift lounges. It provides a sampling of handcrafted products to celebrities and members of the press at major award show gift lounges such as those leading up to The Academy Awards, The Golden Globes, The MTV Movie Awards and The Primetime Emmys. Membership in the Artisan Group is juried and by invitation only. Members showcase a broad range of specialties including jewelry; spa and bath products; designer stationary and paper goods; crocheted apparel; children’s clothing; accessories and toys; ceramics; purses and totes; hand-poured candles; book binding and journals; illustrations and paintings; hand-dyed scarves; fine art photography; hair accessories; pet apparel and toys; woodworking products and more. The Artisan Group also offers its members guidance in the areas of sales, marketing, social media and public relations.