The Berenstain Bears’ Bedtime Battle omBook is now available for the introductory price of $2.99 for Apple and Android devices. 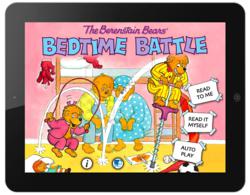 Stan and Jan Berenstains’ hallmark illustrations come to life in this omBook adaptation.

Oceanhouse Media, Inc. and HarperCollins Children’s Books today announce the release of The Berenstain Bears’ Bedtime Battle omBook (Oceanhouse Media digital book) for Apple and Android devices. Offered for the introductory price of $2.99, the omBook is the first in a series of popular Berenstain Bears titles that will be available for the app market as part of a new licensing agreement between the two publishers.

Oceanhouse Media currently is the digital publisher of 16 other Berenstain Bears omBooks that are part of the faith-based Living Lights series by Zondervan, a division of HarperCollins Publishers.

“The Berenstain Bears omBooks continue to be one of our most beloved app series,” said Michel Kripalani, President of Oceanhouse Media. “It’s exciting to have the opportunity to expand the number of these treasured books in our omBook collection thanks to our wonderful partnership with HarperCollins Children’s Books.”

In The Berenstain Bears’ Bedtime Battle, it’s bedtime for Brother Bear and Sister Bear, but they have other plans in mind. Playing with dinosaurs, having a tea party and getting a piggyback ride from Papa Bear all are great alternatives to going to bed. Once Papa Bear announces that it’s bedtime, the great bedtime battle begins!

“Stan and Jan Berenstains’ hallmark illustrations come to life in this omBook adaptation,” said Susan Katz, President and Publisher of HarperCollins Children’s Books. “Oceanhouse Media has a great track record of providing quality book apps that are respectful to the original content of the Berenstains. We look forward to expanding the line of omBooks with them to include many popular Berenstain Bears titles that families have come to love over the years.”

Aimed for readers ages three to seven, The Berenstain Bears’ Bedtime Battle features three options: Auto Play (geared toward younger readers), which plays like a movie by automatically reading and turning pages; Read To Me, which allows users to listen to the narrated story with words highlighted as they are read; and Read It Myself, which lets users read the book in its traditional format. Special features include original artwork, the option to touch any word to have it spoken, word highlighting, professional audio narration and scene-by-scene custom background audio. In addition, words zoom up when pictures are touched, further enhancing the reading experience for young children.

About Oceanhouse Media, Inc.
Creators of the award-winning Dr. Seuss book apps, Oceanhouse Media, Inc. is a leading publisher of more than 240 mobile apps for iOS (iPhone, iPad, iPod Touch), Android and NOOK Color devices. The company was founded in early 2009 by Michel Kripalani, a veteran of the video gaming industry. Thirteen of the company’s apps have reached the number one spot within their categories on Apple’s App Store. In addition, Google has selected the company as one of its Top Developers, a designation granted to only 150 groups worldwide.