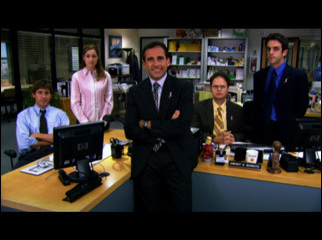 The Entertainment Industry Foundation is truly blessed to have such widespread volunteer support from individuals working in every part of our industry. That backing, combined with Lee Jean’s steadfast commitment to the cause, is helping advance promising breast cancer research.

The Emmy Award-winning comedians of NBC’s “The Office” are lending their talents to a more serious cause -- the fight against breast cancer. Steve Carell, Rainn Wilson, John Krasinski, Jenna Fischer and B.J. Novak appear in a public service announcement encouraging people to participate in, Lee National Denim Day, which benefits the Women’s Cancer Programs of the Entertainment Industry Foundation (EIF).

The cast members, using their signature sophisticated, quirky humor, ask people to wear denim to work on Friday, October 6, and make a $5 dollar donation to support Lee National Denim Day—the nation’s largest single-day fundraiser for breast cancer. The PSA will air on NBC nationwide throughout the month of September.

“We want people to understand how easy it is to support this meaningful campaign in the workplace, and the cast of NBC’s hit comedy ‘The Office’ is the perfect group to deliver this message,” says Lisa Paulsen, EIF’s president and CEO. “The Entertainment Industry Foundation is truly blessed to have such widespread volunteer support from individuals working in every part of our industry. That backing, combined with Lee Jean’s steadfast commitment to the cause, is helping advance promising breast cancer research.”

Money raised will benefit the Women’s Cancer Programs of EIF. Funds will be used to support a groundbreaking scientific project to detect breast cancer in its earliest stage. They will also help accelerate research on treatment and increase patient access to some of the most significant clinical trials, as well as continue to support grassroots programs across the country.

“Lee National Denim Day unites people across the country in one common goal—the fight against breast cancer,” said Liz Cahill, director of advertising and public relations for Lee Jeans. “We’re thrilled that the cast of ‘The Office’ chose to help with our cause. They will inspire people nationwide to be a part of the program.”

Companies, schools or organizations can register by visiting http://www.denimday.com or calling 1.800.521.5533 to receive a comprehensive participation kit, which includes educational materials about breast cancer in addition to supplies that make coordination easy.

Last year, more than 29,000 companies across the nation participated in the single-day fundraiser, and more than $8.6 million was raised for the fight against breast cancer.

The Entertainment Industry Foundation (EIF), as a leading charitable organization of the entertainment industry, has distributed hundreds of millions of dollars to support charitable initiatives addressing critical health, education and social issues.

EIF is committed to saving lives by raising awareness about the importance of early detection of breast and reproductive cancers, and providing funds to advance early detection and treatment research, as well as support to community programs that assist the millions of women and their families at risk of or affected by cancer.

Through EIF’s National Women’s Cancer Research Alliance and EIF’s Revlon Run/Walk For Women, EIF funds some of the most promising research being conducted today to develop new and more effective approaches to the treatment of women’s cancers. EIF grants helped accelerate research that led to a treatment breakthrough—the development of Herceptin®, the first successful drug that seeks out a particular gene found in one of three cases of the most aggressive form of breast cancer. EIF grants have also supported other state-of-the-art therapies bringing new and innovative treatment approaches to breast cancer worldwide.

For questions about EIF’s women’s cancer programs and information about breast cancer, visit eifoundation.org or call 800-426-0010.

Celebrity Pocket Auction In support of Lee National Denim Day, Hollywood stars decorate jean pockets to be auctioned off to benefit the WomenÂs Cancer Programs of the Entertainment Industry Foundation.