A simple and novel exercise using the Thera-Band® FlexBar® has been found to be effective at reducing the pain associated with chronic lateral epicondylitis -- a.k.a. tennis elbow. Two recent studies support the effectiveness of this inexpensive treatment. 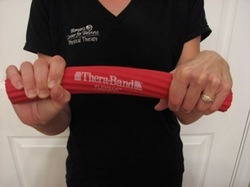 The "Tyler Twist" demonstrated with the Thera-Band FlexBar.

A simple and novel exercise using the Thera-Band® FlexBar® has been found to be effective at reducing the pain associated with chronic lateral epicondylitis -- a.k.a. tennis elbow. Two recent studies support the effectiveness of this inexpensive treatment.

The first study, published in the September 2010 issue of Journal of Shoulder and Elbow Surgery (Volume 19, issue 6, pg 917-922) measures the effectiveness of an exercise that utilizes the Thera-Band FlexBar exerciser, a flexible bar designed for wrist, forearm and hand rehabilitation. The study was conducted by researchers from the Nicholas Institute of Sports Medicine and Athletic Trauma in New York City.

“With up to three percent of the population suffering annually with tennis elbow -- a condition attributed to racket sports but can occur from simple everyday activities -- we felt this population deserved an inexpensive and at-home treatment option to in-clinic machine-assisted or injection treatments,” stated Timothy Tyler, PT, ATC, and lead author of the study.

A second study was conducted to investigate the electromyographic (EMG) activity of the wrist extensors and flexors while performing the exercise. An EMG is a method of evaluating and recording the electrical activity of muscles at rest and during contraction. This pilot study was completed by Andre Labbe, PT, MOMT, and presented at the 12th annual Thera-Band Research Advisory Committee (TRAC) meeting that was held July 19-21, 2010 in Athens, Greece.

“Tim’s exercise is perfect for lateral epicondylitis and now we know the firing pattern of the involved muscles,” added Andre Labbe. “An EMG study supports the validity of an exercise, which is critical when the exercise is being used in clinical treatment.”

Tyler’s study involved 21 patients who had reported chronic symptoms of tennis elbow for at least six weeks, but had no prior surgical treatment for it. The patients were separated into two groups; everyone in the study received standard physical therapy (PT) for seven weeks. Additionally, the FlexBar test group performed a novel exercise, the “Tyler Twist”. This exercise involved eccentric (muscle contraction while lengthening the muscle) wrist extension using the Thera-Band FlexBar. The study showed that the patients performing the FlexBar exercise along with the standard treatment had significantly greater improvements in strength and pain.

“Although this study is limited by its small sample size, its findings revealed a practical and inexpensive at-home treatment that does not require direct medical supervision and has no significant side effects,” continued Tyler. “The ‘maximal’ efficacy of this new treatment would thus likely compare favorably against anything else available and could lower healthcare costs.”

Labbe’s study involved five healthy subjects who conducted the “Tyler Twist” exercise while being analyzed by EMG test equipment. Data was collected from the wrist flexors (flexor carpi ulnaris and flexor carpiradialis) and extensors (extensor carpiulnaris and extensor carpi radialis). An inclinometer was also placed on the dorsum of the hand to measure range of motion (ROM) of the wrist during the exercise. Each study participant used the red (light resistance) FlexBar and performed five repetitions. The resulting EMG activity reports indicated that the success of the exercise could be due to its ability to activate and strengthen the extensors.

“EMG studies make clinicians aware of muscle activity so that diagnosis-specific exercises, such as this one, can be developed and utilized in treatment, including exercises that may reduce the patients dependency on pharmaceuticals or eliminate the need for surgery,” commented Labbe. “While our EMG study suggests that the FlexBar exercise is doing exactly what it needs to do to be successful in treating tennis elbow, we need to replicate this pilot study on actual patients with tennis elbow.”

Timothy Tyler is a physical therapist in private practice in New York City, New York. He is also a Research Associate at the Nicholas Institute of Sports Medicine and Athletic Trauma at Lenox Hill Hospital. Andre Labbe, PT, MOMT, is the owner and physical therapist at A & K Physical Therapy, and regularly lectures around the world. Both Tyler and Labbe serve on the Thera-Band Research Advisory Committee (TRAC).

Performance Health / Hygenic Corporation provided the FlexBars for the study, but did not fund these studies. The studies and abstracts can be viewed at thera-bandacademy.com.