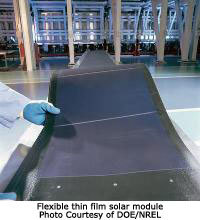 DUNMORE Corporation announces the release of a new DUN-SOLAR(TM) Thin Film photovoltaic (PV) barrier product for thin film PV cell replacement. The new backsheet, DUN-SOLAR(TM) 1700 TAPE (Tedlar(R), Aluminum, Polyester and Polyethylene), a four-layer construction), is in full production and available for use in thin film photovoltaic solar cell manufacturing. A solar cell is the critical component in a solar module.

"DUN-SOLAR(TM) 1700 TAPE is our new thin film photovoltaic backsheet product that effectively creates a high vapor barrier measuring at less than 0.5 mg / square meters per day to protect the thin film technology while remaining economically viable," stated Robin Kobren, Photovoltaic Team Leader at DUNMORE, "while at the same time bonding to a new breed of low Moisture Vapor Transmission Rate (MVTR) encapsulants like the DNP Thermoplastic to, in a sense, hermetically seal in the cells. Not an easy task, but our DUN-SOLAR(TM) 1700 TAPE can do both!"

DUNMORE's Full Line of Protective Backsheets
In addition to the new DUN-SOLAR(TM) 1700 TAPE, DUNMORE offers a full line of protective backsheet products that are used in solar module manufacturing. These products now ready for full scale photovoltaic projects and can be ordered through either the US or European facilities of DUNMORE.

DUNMORE has been producing metallized, coated and laminated films for use in the aerospace, cryogenic and insulation industries for more than 30 years. It began producing photovoltaic film backsheet products three years ago at its German (Freiburg) and US plants. It currently offers a wide array of UL and TUV-certified products for the photovoltaic industry.