Three Women in Health Crises Go Online to Form Lifelong Friendships : Mothers of Boys with Cancer Find Support, Encouragement and Each Other at CarePages.com

Last year, Mimi Avery of Texas learned her three-year-old son, Julian, had a brain tumor the size of a golf ball. A half-year earlier in Iowa, Peggy Larson’s son Coleman, just 2 ½, was diagnosed with the same rare form of cancer, called medulloblastoma. Before that, Michelle Spoonhower of California was told her six-year-old son, Bailey, had stage III Rhabdomyosarcoma, a very aggressive soft muscle tumor. 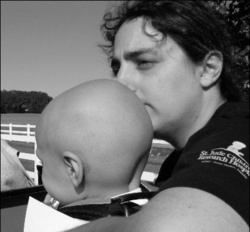 The power of thought and prayer for Julian stretches from Guatemala to France to Canada to everywhere in the U.S. and it has lifted us greatly.

Three women. Three states. Three boys facing months of surgeries, radiation and chemotherapy. Three families in dire need of support and encouragement as they faced the most difficult challenges of their lives. And one social network, CarePages.com, which became a lifeline to connect them all, and a way to inspire others to help fund pediatric cancer research.

Through this site, an online community created to ensure that no one goes through a health challenge alone, Mimi and her husband were able to keep Julian's friends, family and loved ones updated on his progress. But they also became part of a worldwide support group of more than 3.5 million members. Just weeks after Julian's page was created, his father posted "The power of thought and prayer for Julian stretches from Guatemala to France to Canada to everywhere in the U.S. and it has lifted us greatly."

Two of those reaching out to the Avery's with prayers and support were Peggy and Michelle, mothers who found each other through CarePages.com. The three women soon moved their online support offline – with phone calls at all hours of the day and even cross-country visits. (Watch video of their visit on YouTube.)Their families have grown close, too, through a bond that grew from online postings from afar.

Mimi's son Julian lost his fight in January 2008, but today Mimi continues to be involved in the community in the hopes that Julian's supporters from around the world will help other children. She focuses her efforts on gaining awareness and funding for pediatric cancer research. To listen to Mimi's story in her own words, click here to listen to the CarePages.com "Stories of Inspiration" podcast.

The story of Mimi, Michelle and Peggy is a powerful example of how more and more people are going to online social networks to seek, give and receive emotional support during difficult health challenges, and demonstrates the power of these networks to rally support behind a cause, as well as transform healthcare by providing emotional support and community to facilitate healing and well-being.

These three women have inspired and supported thousands of others on CarePages.com and elsewhere. Their friendships and growing network of support even caught the eye of several popular mommy blogs, Chicago's Dawn of "Because I Said So" and Pennsylvania's Michelle Kemper Brown of "My Semblance of Sanity." Mommy blogger and friend, Michelle, also assists in the pediatric cancer awareness mission by hosting "Cancer Kids," a blog which auctions one-of-a-kind artwork to raise money for "the human side of cancer."

CarePages.com has made such networking even easier with a newly enhanced site. Along with a streamlined design, the site features real-time discussion forums around topics such as parenting, cancer, emotional health and spirituality to further develop and grow relationships between site members.

Visit the site (http://www.CarePages.com) and register to read the stories of Mimi ("JuliansWorld"), Peggy ("ColemanScott") and Michelle ("SuperBay"). Their stories and others show how online social networks such as CarePages.com are transforming healthcare by providing the emotional support and community to facilitate healing and well-being.

CarePages is an online community of millions of people coming together to share the challenges, hopes and triumphs of anyone facing a life-changing health event. Through personalized websites, members can relate their stories, post photos and update friends and family instantly. In turn, people who care send messages of love and encouragement. CarePages.com also offers a variety of resources and support tools for living a more compassionate life. CarePages has a simple, singular mission: to ensure that no one faces a health challenge alone. For more information, please visit CarePages.com.