Theologian Brent Landau presents the ancient account of Melchior, Caspar, and Balthazar, the three “wise men” who journeyed to Bethlehem to greet the birth of Jesus. The Revelation of the Magi offers the first-ever English translation of an ancient Syriac manuscript written in the second to third century after the birth of Christ and safeguarded for generations in the Vatican Library. 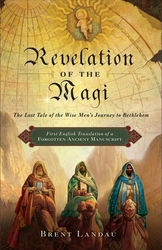 Revelation of the Magi: The Lost Tale of the Wise Men's Journey to Bethlehem

This ancient version of the Christmas story is guaranteed to astonish and delight. It will also raise larger questions of the significance of Christ's birth, and the mission to spread the good news to every corner of the globe.

In REVELATION OF THE MAGI: The Lost Tale of the Wise Men’s Journey to Bethlehem(HarperOne; November 2010, Hardcover), religion scholar and expert in ancient languages, Brent Landau Th.D, provides the first English translation of an ancient Syriac manuscript, along with analysis and insight into who might have written it, and why.

The tale of the Magi is a familiar and beloved part of the traditional Christmas story: three kings from the East who followed the star of Bethlehem to offer gifts of gold, frankincense, and myrrh to the newborn baby Jesus. But what do Biblical texts actually tell us about these mysterious visitors? The nativity scenes, the crèches, Christmas plays, the hymns we hear on the radio—all of these are based on only a few verses found in the Bible. The Gospel of Matthew provides a brief account of the Magi’s visit, yet leaves many basic questions unanswered. In fact, we know very little about these three strange men from the East who miraculously arrived at Jesus’s birth.

Now, an ancient text—told from the perspective of the three Wise Men themselves—reveals another, little-known version of this story. This eighth-century manuscript has languished for centuries in the Vatican Library, but through the determined persistence of a young scholar, Brent Landau, this astonishing discovery has been translated into English for the very first time.

With REVELATION OF THE MAGI, we now have a window into the Magi’s world. Readers will learn of the Magi’s prophecies, their startling visitation in the form of a star, their long journey to Bethlehem from the far East land of Shir, their skeptical reception by Mary, the teachings they receive from the baby Jesus, and their joyous return to their homeland to spread the good news.

This ancient version of the Christmas story is guaranteed to astonish and delight. All the drama and intrigue of the brief description of Jesus’ birth in the gospel of Matthew is filled out in greater, more colorful detail in the Revelation of the Magi, offering for the first time the complete story of these beloved characters.

This rich narrative also raises larger questions about the mission of Christianity as a whole, issues which Landau explains “are of potential importance for anyone who considers herself or himself religious, spiritual, or simply interested in theological questions.”

ABOUT THE AUTHOR
BRENT LANDAU received his Th.D. from Harvard University Divinity School and is an expert in ancient biblical languages and literature. He currently teaches in the Religious Studies Department at the University of Oklahoma, and lives with his wife in Norman, Oklahoma.

“Of the many earliest Christian documents recently discovered inside sealed earthen pots or on forgotten library shelves, Revelation of the Magi is by far the most fascinating. Landau’s presentation—bright and sharp as a gemstone—emphasizes the unique challenge and radical depth of this ancient text’s theology.” — John Dominic Crossan, author of The Greatest Prayer

“Revelation of the Magi should be of interest to not only biblical scholars but also students of the Christian story who want to know more about these elusive fellows." — Booklist