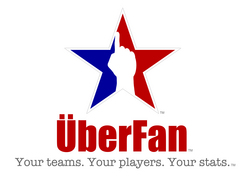 UberFan.com is the fan's electronic baseball card. It's like looking at the back of your baseball card as a fan, complete with stats for all the MLB games you watch.

UberFan.com — an original website concept that recently launched — introduces baseball fans to the new hobby of collecting Major League Baseball stats related to games they watch. By creating a free UberFan.com account, fans can submit MLB games they watch at the ballpark, on TV, on the Internet, or listened to on the radio and get the stats related to those games automatically tracked in personal profiles. Fans can then filter and view stats by various functions according to their preference.

Baseball fans no longer need to wonder how many home runs they've watched their favorite batter hit, for example, or how many strikeouts they've watched their favorite pitcher record. UberFan.com satisfies curiosities like these for fans. It gives fans ownership of stats, more to root for, and an opportunity to get more involved with baseball in a new, fun, and exciting way.

For the first time ever, UberFan.com provides an electronically-automated, democratic-like platform for fans to earn and compare stats to friends and rivals and use statistics to articulate who is baseball's, a team's, a player's biggest fan... or "UberFan."

In A Thinking Man's Guide to Baseball (1967), author Leonard Koppett says, "Statistics are the lifeblood of baseball. In no other sport are so many available and studied so assiduously by participants and fans. Much of the game's appeal, as a conversation piece, lies in the opportunity the fan gets to back up opinions and arguments with convicting figures."

“Just like Koppett, we recognize the power of stats in baseball and the fan’s affinity to them. We’re proud to provide baseball fans with an experience that enhances spectatorship and makes following baseball even more enjoyable,” says Barthel.

Barthel adds: “43% of Americans identify themselves as MLB fans. UberFan.com provides these ‘fans of summer’ with an unique and entertaining way to appreciate games they’ve watched and anticipate the next first pitch.”

Barthel concludes: “Whether a fan is stat obsessed, superstitious, or all-out avid, fans are emotionally vested in their teams and players, want more direct participation and a greater sense of belonging. Ownership of stats may just become the new currency in fandom.”