Long thought to be the "smoking gun" of UFO and conspiracy theorists -- top secret documents alleged to have been written by high ranking government and military officials, including three U.S. presidents, and leaked to the public in the early 1980s, have now been proven fraudulent by forensic linguistic testing. 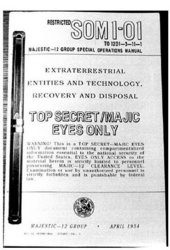 Anyone basing any claims of alien existence or an alien crash at Roswell on these documents would be foolish to do so; they just don't stand up to cutting edge scientific analysis.

Top secret documents alleged to have been written by high ranking government and military officials, including three U.S. presidents, leaked to the public in the early 1980s, have been proven fraudulent by recent forensic linguistic testing. These documents, collectively named "The Majestic Documents" by researchers, contained references to the alleged crash of a flying saucer near Roswell, NM, in July of 1947. References to extraterrestrial technology and alien bodies appear in several of the documents. Dates of the documents themselves range from 1942 to the early 1990s.

The Majestic Documents were allegedly authored by members of an above top secret task force (MJ-12) begun under the auspices of then President Truman to deal with the crash of an extraterrestrial space craft near Roswell. The cache of documents included memos written by President Truman; Admiral Roscoe Hillenkoetter, who would become the first Director of the CIA; Dr. Vannevar Bush, who chaired the Office of Scientific Research and Development; and General Nathan Twining, who headed the Air Materiel Command at Wright-Patterson Air Force Base, where the wreckage was taken, and who served as Air Force Chief of Staff (1953-1957) and Chairman of the Joint Chiefs of Staff (1957-1961). Aside from President Truman, memos allegedly written by presidents Eisenhower and Kennedy are also among the Majestic Documents.

The documents were tested by Dr. Carol Chaski of Georgetown, DE, who was hired by Dr. Michael Heiser, a biblical scholar with an interest in the UFO phenomenon. Dr. Chaski is a leading expert in the linguistic science of authorship attribution, a discipline that uses computers to extract and define stylistic patterns in a given author's writings -- a "linguistic fingerprint". Dr. Chaski pioneered her own computational document authentication software program, ALIAS, for such testing, and is currently the president of ALIAS Technology, LLC. Among the stylistic patterns detected by Dr. Chaski's specially-developed computer program are patterns in sentence structure, word order in parts of speech and use of punctuation.

A total of 17 documents were tested, allegedly written by nine different authors. Dr. Heiser typed the prose text of the disputed Majestic Documents and a set of undisputed control documents for each author for Dr. Chaski's testing. Of the 17 documents tested, only one can be scientifically validated as having been written by the author who is named. Dr. Heiser's assessment: "Anyone basing any claims of alien existence or an alien crash at Roswell on these documents would be foolish to do so; they just don't stand up to cutting edge scientific analysis."

A complete copy of the report on the testing procedures and results can be obtained at http://www.mj12documents.com.

Recently named one of the 100 most influential people in ufology by FATE Magazine, Michael S. Heiser, Ph.D. earned an M.A. and Ph.D. from the University of Wisconsin-Madison and an M.A. from the University of Pennsylvania. Dr. Heiser has taught at the college level for more than 12 years, and has had a lifelong interest in UFO, occult and paranormal phenomena. He is the author of The Façade -- available in a limited edition pre-release at http://www.FacadeTheBook.com