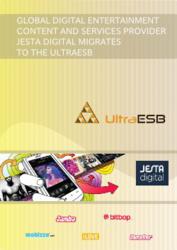 It was a great pleasure to work with subject-matter experts who combined first-hand knowledge, passionate work on their product and dedication to tackle the customer's challenges

AdroitLogic, developer of the high performance Open Source Enterprise Service Bus (ESB) UltraESB, today announced that Jesta Digital, a leading global provider of next generation entertainment content and services for the digital consumer, successfully migrated their ESB clusters to the UltraESB. Jesta Digital is behind Bitbop wireless subscription service to deliver on-demand commercial-free television and films to personal computers, tablets and smartphones, and home to a number of well-known and established brands including Jamba and Jamster, which deliver branded content, music, games and apps to millions of mobile consumers.

"In a very demanding and rapidly changing market it is of utmost importance to be able to quickly adjust the technical platform to support product innovation and change. The UltraESB was able to demonstrate to the Jesta Digital Technology team in Berlin that its simplicity, testability, extensibility and performance is made for a matching foundation" said Eric Hubert, the Executive Director of Strategy and Architecture at Jesta Digital.

On the main ESB cluster, Jesta Digital processes around 80 million messages a day with a peak 3,000 TPS across three nodes. The average CPU utilization has been just 5% with the heap memory usage at 300MB with very low GC overheads due to the efficient use of a RAM disk coupled with Zero-Copy and Non-Blocking IO. Prior to the migration, Jesta Digital customized the ESB Performance Benchmark (http://esbperformance.org) to compare the performance of the UltraESB for both SOAP and Hessian messages over HTTP/S for a sample scenario. Benchmark results similar to those published recently on the ESB Performance site were independently verified by Jesta Digital during this exercise. Furthermore the UltraESB showed extreme stability during stress tests executed over multiple days.

"We have a top notch technical team at Jesta Digital in Berlin and it was a great pleasure to work with subject-matter experts who combined first-hand knowledge, passionate work on their product and dedication to tackle the customer's challenges" said Eric.

During the migration process, AdroitLogic also worked with the Jesta Digital team to include some key features for even better enterprise deployment support. Among these is the ability to switch a live configuration with zero down time while messages are being processed. Previously servers had to be gracefully shutdown for updates, resulting in an unequal distribution of traffic across the nodes after a configuration switch, leading to connection related issues. In addition, AdroitLogic developed a feature to easily manage and monitor services and endpoints via automatic registration against a Zabbix monitoring server, using predefined or customized templates via JMX.

The UltraESB is clustered using the Apache ZooKeeper framework, and thus a single node, or the whole cluster can be managed from any of the nodes via a remote web based console, command line interface or via JMX/jconsole.

AdroitLogic was founded in January 2010 by Asankha Perera, the former lead contributor of the Apache Synapse ESB and the original architect of the WSO2 ESB. In September 2011, Ruwan Linton who initially succeeded Asankha at WSO2 as its next ESB architect, also joined AdroitLogic as its Director of Engineering. AdroitLogic published a new round of ESB benchmark results in October across 8 open source ESBs, which showed a very clear lead in performance against its competitors. In addition to performance, the UltraESB is also one of the simplest ESB's to use effectively, with support for IDE based step-through debugging, Unit testing and a light weight deployment with over 70 samples. AdroitLogic is also one of the very few - if not the only - ESB vendors that publishes code coverage statistics along with continuous builds and code quality reports publicly.

Jesta Digital is a leading global provider of next generation entertainment content and services for the digital consumer. A proven innovator for over 10 years, the company continues to develop and introduce exciting new products that deliver a seamless entertainment experience via web or wireless connection on a broad range of devices. Jesta Digital is home to such well-known, established brands as Jamba, Jamster, iLove and Mobizzo and to Bitbop, the groundbreaking, commercial-free wireless subscription service for TV and movies delivered on-demand to smartphones in the U.S. and across web, tablet and mobile devices in Germany. With principal offices in Berlin, Los Angeles and New York City and operations throughout the world, Jesta Digital is one of the largest companies in the digital entertainment sector delivering compelling products and services to millions of consumers at home and on the go. Jesta Digital is a wholly owned subsidiary of Jesta Group, a diversified company with holdings in real estate, manufacturing, technology and aviation.

AdroitLogic Private Ltd. is a privately held, innovative technology company based in Singapore, that believes in, and proves, that better design and clever code yields much better software. AdroitLogic is driven by the personal dedication and commitment of its founders, who are personally involved with the design, development and support of its products.

Data Sheet - UltraESBTransports, Protocols and Technologies supported by the UltraESB, and information on Performance, Licensing and Commercial Support