Roberts will serve as “Global Ambassador” for the Global Alliance for Clean Cookstoves and discuss cookstoves with Secretary of State Clinton in her “Extraordinary Moms” special airing on the Oprah Winfrey Network Saturday, May 7 from 8–9:30 p.m. (EDT/PDT) 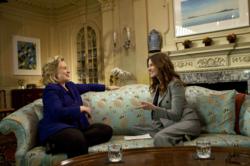 I am proud to stand with Secretary Clinton to work to reduce the senseless and preventable deaths from unsafe cooking conditions in developing countries and I look forward to contributing to the important work of the Global Alliance for Clean Cookstoves.

The Global Alliance for Clean Cookstoves today announced that Academy Award winning actor Julia Roberts will serve as Global Ambassador, helping to bring attention to one of the most urgent health problems facing women and families around the world: deadly smoke from unsafe and inefficient cookstoves.

Ms. Roberts first learned about the Alliance earlier this year while interviewing Secretary of State Hillary Clinton for a special to be broadcast on the Oprah Winfrey Network. “Extraordinary Moms,” presented and executive produced by Ms. Roberts, airs Saturday, May 7 from 8–9:30 p.m. (EDT/PDT).

As Global Ambassador, Roberts will help raise awareness about the millions of people who face health effects, accidents or death in developing countries due to the reliance on traditional cookstoves and open fires that use wood, coal, charcoal, or animal waste for fuel.

“Nearly 2 million people around the world – mostly women and children – die each year from an activity that many of us take for granted: cooking for our families,” Roberts said. “I am proud to stand with Secretary Clinton to work to reduce the senseless and preventable deaths from unsafe cooking conditions in developing countries and I look forward to contributing to the important work of the Global Alliance for Clean Cookstoves.”

Launched in 2010 at the Clinton Global Initiative forum, the Alliance is a public-private partnership led by the UN Foundation that seeks to mobilize $250 million to save lives, improve livelihoods, empower women and combat climate change by creating a thriving global market for clean and efficient household cooking solutions.

Exposure to smoke from traditional stoves and open fires – the primary means of cooking and heating for 3 billion people in developing countries – causes nearly 2 million deaths annually, with women and young children affected most. That is a life lost every 16 seconds.

Cookstove smoke contributes to a range of chronic illnesses and acute health impacts such as early childhood pneumonia, emphysema, lung cancer, bronchitis, cardiovascular disease and low birth weight. The smoke from inefficient stoves continues to contribute to global climate change by producing harmful greenhouse gas emissions such as carbon dioxide and methane, and aero¬sols such as black carbon. Reliance on biomass for cooking and heating also increases pressure on local natural resources and forces women and children to spend many hours each week collecting fire wood – an especially dangerous task for women and girls in refugee camps and conflict zones.

“Today, nearly half the world's population – close to 3 billion people – will eat meals cooked over fires that use charcoal, wood, or even animal waste for fuel,” said United Nations Foundation President Timothy E. Wirth. “A year from now, 1.9 million of those people will be dead. Their death certificates will cite pneumonia or lung cancer, but the underlying cause is exposure to cooking smoke. Unsafe cooking conditions are the fifth greatest threat to health in poor developing countries, yet nobody knows about it. The needed resources cannot be mobilized to confront this crisis if the world community doesn't recognize it as such. Thanks to Julia Roberts, and others who will follow her lead, that task just got a little easier.”

The Alliance’s goal is that 100 million homes will adopt clean and efficient stoves and fuels by 2020, as a first step toward universal adoption. To achieve its ‘100 by 20’ goal, the Alliance will promote stove standards; spur innovative financing mechanisms; champion the cause across the donor and development communities; develop indoor air quality guidelines; tackle global tax and tariff barriers; field test clean stoves and fuels; and develop a research agenda for key issues such as health, climate, technology, and fuels.

The Alliance is a public-private partnership of more than 60 national governments, UN agencies, private companies and non-governmental organizations.

For more information contact John Anthony at janthony(at)unfoundation(dot)org or by phone at 202.778.1639.

About the United Nations Foundation
The United Nations Foundation, a public charity, was created in 1998 with entrepreneur and philanthropist Ted Turner's historic $1 billion gift to support UN causes and activities. The UN Foundation builds and implements public/private partnerships to address the world’s most pressing problems, and works to broaden support for the UN through advocacy and public outreach. Through campaigns and partnerships, the organization connects people, ideas, and resources to help the UN solve global problems. The campaigns reduce child mortality, empower women and girls, create a new energy future, secure peace and human rights, and promote technology innovation to improve health outcomes. These solutions are helping the UN advance the eight global targets known as the Millennium Development Goals (MDGs). For more information, visit http://www.unfoundation.org.