Rockers Saving Abel will join honest artists, comedians, politicians, grassroots leaders, and thousands of Independent and third party activists in Little Rock, Arkansas on June 22. The United We Stand Festival, to be held at the Verizon Arena, unites individuals from across the political spectrum for election reform. 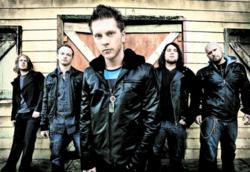 Saving Abel has released albums under the Virgin Records and eOne Music labels (Saving Abel, Miss America, Bringing Down the Giant). The band toured relentlessly with Nickelback, shared the stage with Creed and played for US troops in Kuwait and at Guantanamo Bay. Their hard-hitting electric American rock can shift in a heartbeat to acoustic guitar and mandolin, ranging from the too-controversial-for-some track “Addicted” to the subtle acoustic version of “18 Days”.

Saving Abel’s music is now slated to celebrate Americans coming together with Jesse Ventura, Amber Lyon, Ben Swann and other independent media figures for some real “hope and change” at Free and Equal’s “United We Stand” Festival this summer. The festival has attracted many different voices, all calling for an end to the failed status quo of the “two-party system”. It takes place at the Verizon Arena in Little Rock, Arkansas on June 22nd.

"America can still stand for something other than bailouts for the wealthy, something other than a police state at home and Aid To Dependent Dictators abroad. We can be the most free and most transparent place on Earth again. We can still be the place with the most opportunity for all and it starts on June 22nd," said Christina Tobin, Founder of the Free and Equal Elections Foundation.

Nationally renowned bands Saving Abel and Golden State will join performers Jordan Page and Tatiana Moroz on stage at this game-changing event, adding the power of their music to the call for a transforming revolution in 21st Century America. Don’t miss witnessing these acts in concert at the peak of their powers, all on stage for one goal: standing united for open and honest government.

Join these artists, leaders, and thousands from across the country who demand true and meaningful change at the United We Stand Festival in Little Rock, Arkansas on Saturday June 22nd.