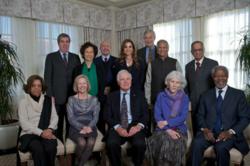 The United Nations Foundation Board of Directors

As our next President and CEO, Kathy will help us meet the promise and opportunities of the coming decades.

The United Nations Foundation Board of Directors today named Kathy Calvin as the new President of the UN Foundation, effective February 1, 2013. At a meeting of the Foundation’s Board, Founder and Chairman Ted Turner announced a number of transitions designed to help the Foundation meet the challenges and opportunities of its global mission to support the United Nations.

In making these announcements, Turner reiterated his commitment to the UN and said, “Since I founded the UN Foundation 15 years ago, it has become the best investment I have ever made. These appointments will help the UN Foundation continue to grow and support the UN through innovative partnerships at a global scale. I could not have made a better choice than Tim Wirth as our first President, and I am so pleased that he will become Vice Chairman of the Board. Tim and Kathy have made a great team at the top of the Foundation. As our next President and CEO, Kathy will help us meet the promise and opportunities of the coming decades.”

The Foundation connects people, ideas, and resources with the United Nations to help solve key global problems. Wirth was recruited by Turner to head the UN Foundation when Turner made his historic $1 billion commitment to UN causes in 1997. Under Wirth’s leadership, the Foundation launched a set of ambitious campaigns related to improving children’s health, empowering women, and attacking climate change, through partnerships with the UN, private companies, other foundations, and leading entrepreneurs.

Since joining the UN Foundation nine years ago, and over the past three years as CEO, Calvin has brought together the largest network of supporters of UN issues in the United States and a global network of corporate, civil society, and media partners. A recognized industry leader with corporate, political, media and public sector experience, Calvin was named one of Newsweek’s “150 Women Who Rock the World,” and in 2012 she was listed in Fast Company’s “League of Extraordinary Women.” She has received numerous awards for philanthropy and leadership.

The United Nations Foundation Board of Directors made these announcements at the conclusion of its semi-annual meeting in Washington, D.C. from November 12-14, 2012. UN Foundation Founder and Chairman Ted Turner presided over three days of sessions with the Board of Directors to discuss the impacts of the recent U.S. elections on global issues and to map out ways to build on the strong U.S.-UN relationship. The Board of Directors met with the UN Foundation’s inaugural class of the Global Entrepreneurs Council for a report and recommendations on ways to integrate innovation and entrepreneurship into the work of the Foundation. The meeting marked an important milestone for the organization – the 15th anniversary of Ted Turner’s $1 billion gift to support the UN, which led to the creation of the UN Foundation.

Media contact: Aaron Sherinian, 202-758-5319; asherinian(at)unfoundation(dot)org
About United Nations Foundation
The United Nations Foundation builds public/private partnerships to address the world’s most pressing problems, and broadens support for the United Nations through advocacy and public outreach. Through innovative campaigns and initiatives, the Foundation connects people, ideas, and resources to help the UN solve global problems. The Foundation was created in 1998 as a U.S. public charity by entrepreneur and philanthropist Ted Turner and now is supported by global corporations, foundations, governments, and individuals. For more information, visit http://www.unfoundation.org.