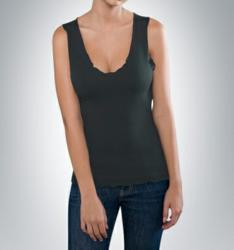 Merrow tank, made in USA.

All American Clothing Co, the Ohio based company known for manufacturing the 'best damn jeans in the land' featuring traceability today announced its release of a new women`s clothing line.

All American Clothing Co, the Ohio based company known for manufacturing the 'best damn jeans in the land' featuring traceability today announced its release of a new women`s clothing line. The new ladies line features a wide selection of fashionable skirts, dresses, shorts, and tank tops. All items are made with a soft, lightweight fabric built for quality comfort. They are considered to be eco-friendly with no harms on the environment during the manufacturing process, and they are ladies clothing items made in USA.

The new women`s line will join an expanding selection of clothing items at the All American Clothing Co. The company announced today that they have also added new styles of jeans, tee shirts, and socks for women recently. For men, new styles of tee shirts have been added in recent memory as well. As their name implies, the All American Clothing Co. and its items are proudly made in the USA. Prices will range from $8.99 to $69.99. Shoppers can subscribe to the company`s newsletter and can take advantage of a sales price every week on the many American made items available on their website at http://www.allamericanclothing.com.

Shoppers can trace All American Jeans back to the farmer who grew the cotton used in their jean. Each jean comes with a 'Certificate of Authenticity' that includes a traceability number. Enter the number on the All American Clothing Co. website and it will tell shoppers exactly which farmers and mill were involved in producing that pair of USA made jeans. In all, there are over 11,000 American cotton farmers supported through the traceability system.

About All American Clothing Co.

Lawson Nickol was a national sales manager for a USA made blue jean company in 2002 when he learned that his employer had started making jeans in Mexico. As an avid USA made supporter, when Nickol learned his employer has began outsourcing U.S. jobs he decided to resign his position and start his own American made blue jeans company with his son BJ Nickol - they called it the All American Clothing Co. Since 2002, the company has continued to grow into a success story about the American dream. They have recently acquired a cut & sew factory operation of their own where American made jeans will be manufactured for their All American Brand, other companies, and designers interested in making clothing in the USA.

Ladies tee, made in USAThis soft, casual, and basic form fitting fine jersey tee is a necessity for any wardrobe. The smooth, lightweight fabric is perfect for printing.

Jessica Jean, Made in USAA look of comfort, confidence, clean and dark. The Jessica jean was designed for those with a few less curves and gives you an attractive, clean, refined look that will go with almost any outfit combination.

Low rise short, made in USA.These basic shorts are perfectly versatile—wear them to do yoga, cheer, or go running. The hint of spandex makes it retain its shape and the fold-over waistband flatters your waist line.

Hybrid dress/skirt, made in USA.Maxi skirts are a fashionable staple for every season, and ours reign supreme in fit, comfort and quality. Feminine and functional, desirable basic can also be worn as a strapless dress.