Iconic 1960s furniture and props from Emmy® and Golden Globe®-winning drama MAD MEN are being auctioned for charity on eBay -- and uShip's Help on Wheels is transporting many of the large items free of charge. Pieces include desks, sofas and coffee tables from Don Draper and Roger Sterling’s offices, as well as other furniture from the show’s Sterling Cooper ad agency. 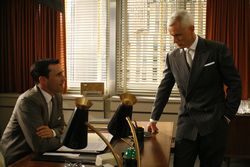 When uShip has offered free shipping on previous charity auctions, we've noticed that buyers place higher bids – by as much as 15-20 percent – which ultimately raises more money for the cause

uShip’s Help on Wheels charity delivery vehicle is about to make the ultimate vintage office move: classic furniture and props from Emmy® and Golden Globe®-winning drama MAD MEN. The incredibly popular cable series, set in the 1960s, is holding the first official MAD MEN charity auction on eBay (http://3.ly/madmen). The 10-day auction, hosted by LIONSGATE ® and Auction Cause, runs through Sunday, Aug. 22 at 7 pm PT.

Winning bidders receive free shipping within the U.S. from uShip, the global online transport marketplace, on many of the large items being auctioned, including desks, sofas, tables, credenzas and chairs from the show’s iconic Sterling Cooper ad agency. Among the lot are pieces from the offices of lead characters Don Draper and Roger Sterling, the sofa from the infamous “Pete and Peggy” episode, Sterling’s office bar, and chairs from the agency’s conference room.

A portion of the proceeds raised by the auction benefit the Lung Cancer Program at City of Hope, one of the nation’s leading research, treatment and education centers for cancer and other life-threatening diseases.

“When uShip has offered free shipping on previous charity auctions, we’ve noticed that buyers place higher bids – by as much as 15-20 percent – which ultimately raises more money for the cause,” said Eric Gazin, CEO of Auction Cause. “LIONSGATE and Auction Cause appreciate uShip’s generosity on this MAD MEN auction as we look to raise both awareness and funds for City of Hope’s important work.”

MAD MEN, the only cable series to win back-to-back Emmys® for Outstanding Drama Series and the only series to win three consecutive Golden Globe® Awards for Best Drama, is set in 1960s New York and follows the lives of the ruthlessly competitive men and women of Madison Avenue advertising. The show airs Sunday nights at 10 pm on AMC.