Rescued in 2007 from Michael Vick’s dog fighting operation, Lucas, one of 22 dogs sent to Best Friends Animal Society http://www.bestfriends.org for care where he was a much-loved canine. 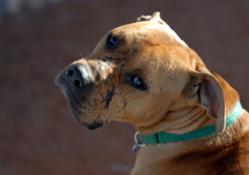 Lucas was bigger than the abuse he had suffered and bigger than his abusers. In fact they never really touched the real Lucas

A dog who played a pivotal role in saving the lives of canines confiscated from dogfighting busts finally has lost his battle with a myriad of health problems. Lucas, who was Michael Vick’s grand champion, was humanely euthanized at Best Friends Animal Society’s sanctuary Wednesday evening, June 19.

Lucas’ battled-scarred face left a lasting impression on anyone who ever met him—not because of his appearance, but because the often happy-go-lucky Lucas never stopped grinning when he was around people.

Because of the perceived street value based on his previous notoriety and underworld status, the Federal judge who adjudicated the Vick dogfighting case (and authorized the placement of the Vick dogs with rescues), ruled that Lucas be released to Best Friends with the condition that he remain a lifetime-care dog at the sanctuary, located in Kanab, Utah.

Lucas was one of the 22 “most challenging” dogs rescued in April 2007 from Vick’s Bad Newz Kennels fighting operation-- dogs that the judge would only release to Best Friends. They came to the sanctuary in January of 2008, following Vick’s trial and the appointment by the court of a Guardian/Special Master to recommend appropriate placement of dogs seized in the initial raid.

At Best Friends, the dogs were affectionately dubbed “The Vicktory Dogs.”

Prior to the Bad Newz Kennels case, there was no hope for dogs confiscated in dogfighting cases, according to Gregory Castle, chief executive officer of Best Friends Animal Society.

"Before Lucas and the rest of the Vicktory dogs came to Best Friends, the policy on dogs taken from fighting rings was that they be killed. That’s it. That was the policy – rescue them from the bad guys and then kill them. After the Vicktory Dogs those policies and organizational positions were changed in favor of every dog being treated and evaluated as an individual.”

John Garcia was co-manager of the sanctuary’s dog area at the time of the case. He was sent back east to get to know the dogs and help them transition to their new life. His relationship with the dogs was chronicled on the National Geographic Channel series “DogTown.”

“Lucas was inspirational from the first time I ever saw him, I was impressed that after all he had gone through, he still loved humans,” said Garcia, who is Best Friends’ emergency response manager. “He showed us the resilience of canines, something we humans need to learn. Bottom line, he was the king. He changed people's perceptions worldwide about who fighting dogs were and what they could become. I think it's time not be sad, but to celebrate his life. He lived a happy life at Best Friends and Lucas saved thousands of other dogs' lives just by being who he was.”

When the dogs first arrived at Best Friends in January 2008, media came from around the country to meet the dogs. While most of the other dogs were very frightened and cowered from the camera, Lucas proudly hopped on top of his doghouse, wagging his tail nonstop and posing for the camera. Several hardened newspeople were visibly smitten with this charismatic dog.

"Ironically, of all the Vicktory Dogs, the one who could never be adopted per court order, was the most social and well-behaved of them all around people,” said Castle. “And that is how Lucas will be remembered around the staff offices where he spent his days. It was a blessing in every way to be around him and to witness his wonderful effect on everyone he met.

“Lucas was bigger than the abuse he had suffered and bigger than his abusers. In fact they never really touched the real Lucas,” Castle said.

Lucas embodied an indomitable and gentle spirit, but also he represented the tragedy and abuse that the worst of humanity imposes upon the best of our animal friends. It was never possible to escape the sad reality that behind his heavily scarred muzzle and intimidating reputation of a grand champion fighting dog was a sweet, affectionate, regular dog who wanted nothing more than to be around people – to love and to be loved.

“Lucas should have been someone’s pet and been raised in a loving home,” added Castle. “His life, however, was stolen by a gang of thugs who thrived on inflicting pain on helpless animals. Yet, he bore not a hint of malice toward people. In fact he makes the case that it is the characteristic loyalty and desire of dogs to please their people that is manipulated and used against them to get them to fight, which most certainly doubles the crime and abuse of dog fighting."

“Lucas was indeed a champion, but his greatest victories were outside the ring. He won our hearts and taught the world about the integrity and depth of character that is a dog.”

About Best Friends Animal Society®
Best Friends Animal Society, is a national animal welfare organization building no-kill programs and partnerships that will bring about a day when there are No More Homeless Pets®. The society's leading initiatives in animal care and community programs are coordinated from its Kanab, Utah headquarters, the country's largest no-kill sanctuary. This work is made possible by the personal and financial support of a grassroots network of supporters and community partners across the nation.

To become a fan of Best Friends Animal Society on Facebook, go to: http://www.facebook.com/bestfriendsanimalsociety