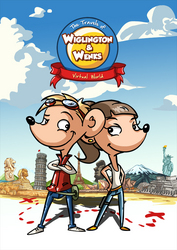 “This site has the perfect education-to-fun ratio, which our family is always looking for.”- Disney FamilyFun Magazine

“This site has the perfect education-to-fun ratio, which our family is always looking for.” These were the words parent testers for the Disney FamilyFun Magazine – a trusted resource for families and parents – used to describe The Travels of Wiglington and Wenks Virtual World. This virtual world or kids was also voted as one of Disney FamilyFun’s Top Ten Fun Websites in the magazine’s September 2010 issue.

Since 2006, Aldric Chang – a creative entrepreneur who runs 3d animation company MediaFreaks and is father to a 9 year old boy – has been exploring virtual worlds with his child. It did not take long for him to realize something was missing from the existing virtual worlds for kids. There was just not enough value and substance to educate and entertain children at the same time. Although there were lots of games to play and virtual items to purchase, but they taught nothing to the kids. Sure enough, stories of virtual worlds which encouraged nothing but playing games and consumerism got featured on the mass media soon after.

As Chang watched the media lynch these virtual worlds, he felt quite certain he had the answer to the virtual world which has the perfect mix between education and entertainment. He developed a concept and what he needed was the correct intellectual property to build the world upon.

The opportunity came when John Bittleston – the author of The Travels of Wiglington and Wenks children books, theatre play, exhibition, board game and children’s project, teamed up with Aldric Chang for ideas to grow his intellectual property.

"Wiglington and Wenks teaches world history, geography and culture to kids and at the moment features more than 10 historical characters and locations like the Amazon Forest, Madagascar, Grand Canyon, Singapore, London's Big Ben and more. We have lots more in the pipeline pending funds. Kids and parents believe that we are the best virtual world on the market, and we believe that too." says Aldric Chang.

A recent procurement of the TRUSTe seal - which requires a series of privacy compliance tests to obtain - demonstrates Wiglington and Wenks’s resolve at keeping their players safe.

“Our test launch has demonstrated a product with greater potential than any other children’s virtual world to date and we would like to consider investments or selling Wiglington and Wenks to a corporation or individual who can take it to the next stage. We welcome all interested parties to speak to us.”

NAPPA Gold Award Winner 2010 The Travels of Wiglington and Wenks was a Gold Award winner of the National Parenting Publications Awards 2010.

Costumes Galore!Dress up in dozens of costumes from different countries and cultures.

Feed the AnimalsLearn about the feeding habits of the animals through feeding them!

Coral PreseversDo your part to protect the corals by clearing the trash from the seabed.

Islands and HousesNurture your creativity by building your very own islands and houses.

Feeding Animals in MadagascarLearn to take care of and play with animals in the animal kingdom of Madagascar.

Go Shopping in Singapore!Visit Singapore and soak in the multi-cultural environment of this East-meets-West cosmopolitan city.

Mingle with the Pirates!Explore secret hideouts like this Pirates' Den and get rewarded for your bravery.

Amazon ConservationLearn about forest conservation in the great Amazon jungles.