Furthering the education for women's shelters and groups, a panel of local lawyers, therapists and police gathered to support increased awareness about domestic violence procedures in New Jersey. 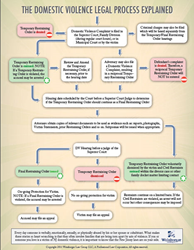 By providing shelters and DV support groups with quality information regarding protections under the law and the emotional and therapeutic needs of victims, we hope these support networks are better equipped to provide assistance.

In response to the more than 70,000 domestic violence reports filed in New Jersey each year, Weinberger Law Group hosted a Domestic Violence Educational Workshop on February 6, 2013 in order to facilitate a meaningful conversation about how to assist domestic assault victims and reduce statewide domestic violence statistics.

“For victims, domestic violence truly touches every aspect their lives. By providing shelters and DV support groups with quality information regarding protections under the law and the emotional and therapeutic needs of victims, we hope these vital support networks are then better equipped to provide assistance,” explains Bari Weinberger.

This isn’t the first time Weinberger’s law firm has taken a lead in the area of domestic violence. Last year, Weinberger Law Group took the step of placing the forms and helpful instructions on understanding the restraining order process on their website as a way to show domestic violence victims exactly what information is needed to file a TRO. As Weinberger points out, restraining orders can be a crucial item to put in place when an instance of domestic assault occurs, but mistakes made when filing paperwork can lead to TRO applications being denied.

“We wanted to offer clearer instructions to help make the process for domestic violence victims filing for a restraining order as transparent as possible. We have had a great deal of positive feedback for doing so, and will continue to look for ways to make domestic assault information as easy to access as possible,” adds Weinberger.

Attending the domestic violence workshop was by invitation only. Weinberger Law Group plans to make certain resources and video available on their website at http://www.weinbergerlawgroup.com following the event.