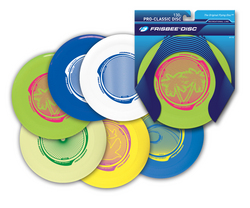 Toy and activity game manufacturer WHAM-O® announced today that they are bringing 50% of Frisbee® production to the United States in a move that aims to increase manufacturing jobs in the domestic market. The company behind some of the most beloved outdoor activity toys and games, including Slip ‘N Slide® and Hula Hoop®, will begin domestic production of Frisbees at the end of this month through a partnership with Manufacturing Marvel America, a division of the international Manufacturing Marvel Group who specializes in plastic injection molding for toys and operates facilities in California and Michigan.

“WHAM-O and its many iconic toy brands are part of American culture and have been entertaining American families for over six decades with good old-fashioned fun and play,” said Kyle Aguilar, CEO of WHAM-O. “We’re proud to help stimulate the local job market by bringing more manufacturing jobs back to the U.S.”

Prior to WHAM-O’s initiative with Frisbees, the company began producing one of their PoolZone™ products in Michigan this past August.

About Frisbee®
At its roots, Frisbee is pure energy, emotion and excitement fused with the spirit of high-flying competition. Since its earliest inception, whenever the first person threw the first disc-shaped object to witness its graceful flight through the air, the essence of Frisbee has remained untamed and self-governing. It was this renegade spirit that attracted Walter Frederick Morrison to create the first plastic flying disc in the 1950’s. WHAM-O began manufacturing, promoting and distributing Morrison’s invention as the Pluto-Platter, which just a few months later became Frisbee®. It wasn’t until 1964, that the company’s own “Steady” Ed Headrick, the father of the modern Frisbee, added concentric circles, improving its aerodynamics and revolutionizing the plastic disc’s flight. Today, Frisbee has become a global symbol of carefree and spirited competition. Its unique attributes have given rise to hundreds of new competitive individual and team sports.

About WHAM-O®
WHAM-O, Inc., founded in 1948, has created some of the most innovative and imaginative toys for more than 60 years. Beginning with the WHAM-O® Slingshot, WHAM-O’s toys, such as Slip ‘N Slide®, Frisbee®, Hula Hoop® and Hacky Sack®, have captured the imagination of generations and have become legendary. WHAM-O designs and manufactures a core of more than 70 captivating products, which, along with its MOREY® and BZ® Bodyboards, CHURCHILL® Fins and Riva® Snowboards, are carried by virtually every toy, sporting goods and mass retailer in the world. For more information, please visit http://www.WHAM-O.com or call (510) 596-4270.