How to Be a Prepper by Storing Survival Food Using “When the Food Runs Out,” from AbsoluteRights.com Article

Find out how to be a prepper with Absolute Rights’ help and the newest Special Report, said a recent online article. 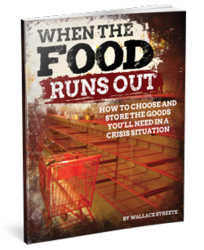 When the Food Runs Out

“When the Food Runs Out” will make preparing for the worst a simple and fully explained procedure.

Learning how to be a prepper takes a lot of survival skills and supplies, plus some expert guidance to help with the tough stuff, according to a recent article from AbsoluteRights.com. Disasters lurk behind every corner and can strike with little or no warning, making preparatory procedures the most important steps towards health and safety during a crisis, the article said.

A crisis is exactly what our food supplies are headed towards, and it’s making people realize the weight of this matter with mainstream news headlines, said the article. It also inspired Absolute Rights to release their latest Special Report, “When the Food Runs Out: How to Choose and Store the Goods You’ll Need in a Crisis Situation.”

The Special Report is written by Wallace Streete, known survivalist and senior contributor to Absolute Rights. His experience, combined with his network of specialists including Homeland Security, hostage negotiators, and seasoned EMTs, has gone into making “When the Food Runs Out” the best and most comprehensive source of survival food storage information anywhere, said the article.

The need for such a source has increased in light of the recent issue sweeping through the global news system, the article said. A massive American drought has caused some of the largest food producers to produce less-than-adequate crops, which the article said has led to a chain reaction of diminished supplies and spiked prices.

That’s why “When the Food Runs Out” shares detailed plans and strategies for acquiring the food, water, and supplies needed to survive any situation.

The Special Report shows not just how to prepare, but how to do it responsibly and in an affordable way. The lists and categories in “When the Food Runs Out” will show any family how they can build up their stockpile and reach ultimate preparedness, according to the article.

Having the common sense to prepare doesn’t make someone an extremist or a conspiracy theorist, the article said. It merely separates those who are ready from those who aren’t.

“When the Food Runs Out” will make preparing for the worst a simple and fully explained procedure, said the article. There’s nothing to fear about taking the necessary steps; what people should be afraid of is the state of shock and panic that will set in if they aren’t ready for anything. The article suggested finding out how to be a prepper with the quintessential guide: “When the Food Runs Out.”

Absolute Rights informs patriotic Americans on their given rights, plus helps protect those rights from government or disaster intrusion. Most importantly, it prides itself on alerting people when their rights are being threatened, creating an active and informed community. For more information, be sure to visit AbsoluteRights.com.