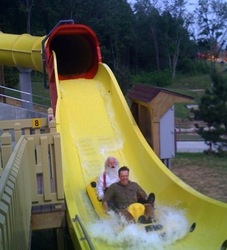 A world-wide audience will be able to tune in to see behind-the-scenes construction and maintenance work at Holiday World & Splashin’ Safari on the National Geographic Channel this week.

A year in the making, the “Ultimate Water Ride” episode of “World’s Toughest Fixes” will focus on construction of Wildebeest water coaster, track work on The Voyage roller coaster, and other park activities.

“World’s Toughest Fixes” is a host-driven show, with “engineering enthusiast” professional rigger Sean Riley taking part in the task at hand. While on location at Holiday World last fall, Riley helped top Wildebeest’s lifthill and also placed the final piece of the water coaster’s fiberglass. He returned in May to ride Wildebeest and experience a weekend in the park when it was open to the public. Riley also spent time training with Splashin’ Safari’s lifeguards and touring the town of Santa Claus.

“World’s Toughest Fixes,” now in its fourth season, is one of National Geographic Channel’s most-watched programs. The channel is available in more than 140 countries, seen in over 160 million homes and in 25 languages.

Holiday World & Splashin' Safari are closed for the season and will reopen in May with the premiere of Safari Sam’s SplashLand, a children’s waterslide play area. For more information, visit Holiday World's website or call 1-877-Go-Family.