Adventurist Joby Ogwyn Becomes First Man In History to Fly a Wing-suit Next to Mt. Everest

Climbing Mt. Everest three times and setting a speed record was not enough for Joby Ogwyn. He wanted to fly next to the tallest mountain in the world and land at the base camp. In October 2010 he did just that. 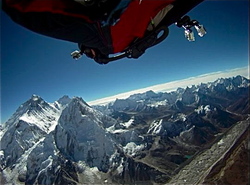 The biggest adventure on Mt. Everest in decades.

Joby Ogwyn is still coming down from his historic Everest wing-suit flight. On October 8th, 2010, Joby Ogwyn stepped out of a small plane hovering over the Himalayas at 29,000 ft and into the history books, becoming the first person to fly a wingsuit next to Mt. Everest. Joby's Everest flight was the culmination of more than two years of planning and training and almost did not happen as the government and rival adventurers tried to stop him. In the end the flight was amazing and Joby flew over the Himalayas for more than two minutes before pulling his one BASE jump parachute. Fighting the turbulence of flying in the jet stream and a massive line twist on his parachute that left him flying out of control towards a glacier, Joby fought his way down to land at Everest base camp at over 17,000 ft. No one had ever landed a BASE parachute at that altitude before.

Joby has massive experience in the climbing world. He has climbed the "Seven Summits" and made more than 30 climbing expeditions around the world. In 2008 Joby set the world record for the fastest ascent of Mt Everest, climbing from the base of the route to the summit in just nine and a half hours. Joby ran out out of oxygen on the top and managed to climb all the way down to base camp unassisted. A feat no other climber in history had ever done before. After that climb Joby's best friend and climbing partner, Inaki Ochoa, was killed on the nearby peak, Annapurna. This prompted Joby to explore the mountains in a different way. Joby set out to learn to fly a wing-suit and make the ultimate flights next to the most iconic mountains in the world. Joby had learned how to BASE jump while filming his documentary series "The Adventurist" for National Geographic Adventure and Discovery HD Theatre and saw wing-suit flying as the next generation of adventure sports and a new way to explore. Joby teamed up with fellow BASE jumper and cameraman Barry Holubeck and the two began training to make the biggest wing-suit flight of all time. The first big mountain flight took place on the infamous Eiger north face in Switzerland. Joby and Barry used a helicopter to position themselves right over the 13,000 ft summit and then jumped out. They flew down the entire east ridge of the mountain more than a dozen times. They then moved on to a more technical jump on the world famous Matterhorn. The duo were the first wing-suit pilots to fly next to the north face of this iconic mountain and landed near the village of Zermatt. It was then that Joby knew they could fly next to Everest.

Armed with a new prototype wing-suit called the X-WING, Joby and Barry went to Nepal and made the arrangements for permits and made the trek to base camp to find suitable landing areas and to check the weather patterns. They had custom made suits with small oxygen masks built in. They wore insulated clothing under the suits for the extreme cold. They had small HD cameras built into their suits to capture all the action of the flight. After checking the base camp area they flew back the village of Lukla in a helicopter. A small porter airplane picked them up the next morning and they flew away towards Everest. The plane ride lasted about half an hour and took them over areas of the Himalayas never seen by man. The pilots let the flyers know they were in the right place then Joby opened the door of the plane. They struggled to make out the landing area but found it and got ready to jump. The plane could not slow down and still maintain the altitude so getting out was difficult. Joby finally pushed his way out the door and started flying. Barry jumped after him and was instantly blown away in the jet stream winds. Joby had a choice to follow Barry or make his own flight which he did. Flying in the middle of the greatest mountains in the world was an experience hard to put into words. The flight was so technical and dangerous that Joby figured they had a 50/50 chance of survival. Their flight system worked perfectly but no one had ever opened or landed a parachute that high before. When Joby's parachute opened it started to twist out of control. Joby managed to flight his way out of the line twist at the last second and land safely. Ogwyn has plans to return to Everest and make another wing-suit flight this time with IMAX cameras rolling. Joby has also created a expedition company called Adventurist Expeditions to take people on tandem skydives near Everest and also offers treks and climbing expeditions to the tallest mountains in the world.

Joby Ogwyn lands at over 17,000ft at Mt. Everest base camp

Joby Ogwyn at Everest base camp