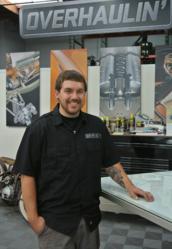 WyoTech graduate, Ian Van Scoyk, on the set of Overhaulin'

Van Scoyk’s performance on the project was so valuable that he was hired full-time after just one episode where they transformed a 1967 Mustang for a Chino Hills, Calif. resident.

Ian Van Scoyk graduated from WyoTech – Laramie in October 2012. He was an outstanding student, graduating in the top of his class with a diploma in automotive and motorsports chassis fabrication. His hard work paid off when he and three other WyoTech graduates were selected to appear as participants on Velocity’s hit series Overhaulin’. The show features a team of highly skilled automotive mechanics that “overhaul” a deserving person’s vehicle without their knowledge in a very short period of time. Van Scoyk’s performance on the project was so valuable that he was hired full-time after just one episode where they transformed a 1967 Mustang for a Chino Hills, Calif. resident.

“Ian had perfect attendance and worked hard during his time here at Laramie,” said Guy Warpness, president of the WyoTech – Laramie campus. “His desire to do the job right the first time, his attitude and his dedication made him the perfect candidate for the project. We had a lot of talented graduates to choose from, but Ian stood out as one of the best.”

Born in Orange, Calif., Van Scoyk became interested in cars at a young age. He remembers his father and grandfather working on cars in the family’s garage. This do-it-yourself attitude inspired him to work on his own 1952 Chevy pick-up truck, which was given to him as a gift when he turned 16. After graduating high school, Van Scoyk landed a job in an off-road shop where he continued to hone his skills on the company’s rock crawlers and other four-wheel drive projects. However, Van Scoyk knew that to succeed in an automotive career he needed additional skills. As a result, he chose WyoTech – Laramie due to the variety of programs and the amount of hands-on training that was available there.

“WyoTech taught me everything that I needed to land a job,” said Van Scoyk. “Knowledge of the entire car building process such as welding, chassis design, engine building and especially fabrication. And they also taught me to give 100% and work hard. Without the right attitude, I couldn’t have kept up with the talented Overhaulin’ team.”

About WyoTech:
WyoTech is a division of Corinthian Colleges, Inc., one of the largest post-secondary education companies in North America. With five campuses located throughout the United States, WyoTech offers degree and diploma programs in the fields of automotive, diesel, collision/refinishing, motorcycle, marine and construction trades. In addition, WyoTech offers advanced training programs in applied service management; advanced diesel; light duty diesel; advanced automotive diagnostics; street rod and custom fabrication; motorsports chassis fabrication; high performance power trains; and trim and upholstery technology. Programs and schedules vary by campus. For more information about WyoTech, go to http://www.wyotech.edu. For more information about our graduation rates, the median debt of students who completed the program, and other important information, please visit our website at http://www.wyotech.edu/disclosures.