EarthDesk... the Dynamic Satellite Desktop - Updated for Both Windows and Macintosh

Xeric Design has updated EarthDesk 5, its award-winning, real-time dynamic desktop map, for both Windows and Macintosh. 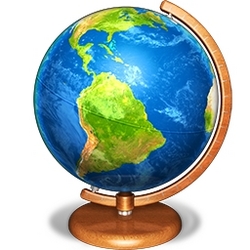 Put the world on your desktop...

EarthDesk replaces your static desktop with an image of the Earth showing current sun, moon and city illumination, as well as real-time global cloud coverage, allowing you to track hurricanes and other weather systems on your Macintosh or Windows desktop.

EarthDesk operates silently in the background, keeping your desktop updated while you work. Unlike a screen saver, which only appears when your system is idle, EarthDesk's dynamic desktop is continuously displayed as your desktop background (and optionally as a screen saver).

Among EarthDesk's highlights are eleven map projections, a database of 10,000 cities for centering the map, as well as enhanced satellite, natural satellite and political maps. EarthDesk automatically updates when waking from sleep and supports multiple displays.