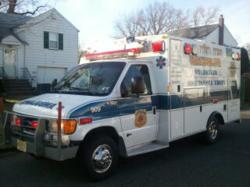 Mr. Stern and his colleagues at Yellowstone Capital sprang into action yet again and by reaching out to fellow associates they raised the amount needed to cover the purchase of the replacement ambulance.

Hatzalah Volunteer Ambulance Corp (HVAC) of Union County NJ, founded in 2004, is a non-profit volunteer Ambulance Squad, serving the communities of Elizabeth, Hillside, Union and its surrounding areas. Its primary goal is to provide rapid response and rapid treatment to medical emergencies, and to provide transport of patients to a hospital for treatment. HVAC is currently staffed by twenty-two state certified Emergency Medical Technicians (EMT's), all ready at a moments notice to drop whatever they are doing to help save a life. HVAC owns a fleet of three ambulances which are parked at strategic locations within its coverage area. Two First Responders arrive at emergency calls in their own vehicles and are followed by a third responder bringing an ambulance to the scene. All responders are equipped with emergency jump bags consisting of Basic Life Support equipment as well as defibrillators (AED's). The Hatzalah response system gets members to the scene of medical emergencies in a matter of minutes in situations where time is of the essence.

HVAC is completely staffed by volunteers, and patients are never charged or billed for any of its services. No one in HVAC receives a salary or any other form of compensation. HVAC is 100% dependent on the generosity of its donors in order to fund its modest budget.

HVAC's largest capital expense is its fleet of ambulances. In 2010, HVAC was in desperate need of replacing one of its older ambulances. When it began a campaign to raise the necessary funds, Board Member & Chief Yudi Abraham reached out to his friend Mr. Isaac D. Stern, President of Yellowstone Capital for help. Within two weeks, Mr. Stern's firm Yellowstone Capital raised the necessary funds. Chief Abraham said, "We were completely astonished at the effort Isaac and Yellowstone Capital put into this project. They made this mission their own, and would not rest until the necessary funds were raised. That same ambulance now responds to approximately half of our calls. I tell Isaac that he is an active partner with Hatzalah. While we have the merit of being the ones who actually respond, our actions would literally not be possible without his support."

This winter, HVAC was once again in need of replacing another older ambulance. Chief Abraham states that, "Mr. Stern happened to call me that very week to see how things were going with Hatzalah. I felt bad even mentioning our problem, but I did, and the response was immediate and enthusiastic. Later that day, Isaac called me back and told me that the amount would be raised by the end of the week." Mr. Stern and his colleagues at Yellowstone Capital, a merchant cash advance provider, sprang into action yet again and by reaching out to fellow associates they raised the amount needed to cover the purchase of the replacement ambulance, in addition to another donation from a fellow community member. "There are really no words to describe our deepest appreciation to Mr. Stern and Yellowstone Capital for the support they have shown us over the years," said Chief Abraham. "They have become true partners in our ongoing mission of saving lives."

Hatzalah of Union County would like to thank the following individuals & companies for their generosity in helping us secure our two ambulances: