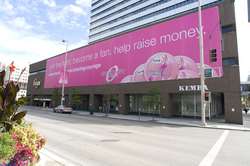 Kroger's wanted to do something extra this year, something that would really generate awareness. Our partners at Yoplait jumped on board by introducing the social media element.

This year marks the 10th Anniversary of Kroger and Yoplait’s partnership supporting the fight against breast cancer. To honor that, Yoplait and Kroger are urging Facebook fans to “Like” http://www.Facebook.com/sharingcourage, where for every new fan, Yoplait will donate $1 up to $150,000 through 10/31/10 to Susan G. Komen for the Cure®.

It’s all part of Kroger’s annual Giving Hope a Hand® campaign, during which the Kroger Co. Family of Stores, in partnership with key suppliers such as General Mills (Yoplait), pledge $3 million to support breast cancer initiatives in communities across the country. Earlier this month, the City of Cincinnati’s skyline turned pink as the Kroger headquarter building became illuminated with pink spotlights. In addition, Kroger representatives and breast cancer survivors revealed 150-foot pink banners attached to the Kroger building, urging Cincinnatians and others to become fans of http://www.Facebook.com/sharingcourage.

“We wanted to do something extra this year, something that would really generate awareness. Our partners at Yoplait jumped on board by introducing the social media element: For every person who ‘Likes’ the Sharing Courage page on Facebook, Yoplait will donate an additional $1 to breast cancer research. To date, this campaign has already reached over 38,000 Facebook fans and with about 20 more days left, we hope to raise as much money for the cause as possible. The impressive display of pink lighting and promotional signage wrapping Kroger’s headquarters was the icing on the cake,” said Marianne Spain, Manager of Integrated Marketing for Kroger Corporate Brands, and a breast cancer survivor.

Yoplait® and Kroger have supported the cause through “Kroger Salutes Survivors”. During the past 10 years, they have donated over $1 million to local Komen Affiliates of Susan G. Komen for the Cure®, both through in-store efforts and at 17 local Susan G. Komen Race for the Cure® events in markets across the country. PowerPact, a shopper marketing and promotions agency, has worked on this campaign since it’s inception in 2000.

For the 12th consecutive year, Yoplait® lids will turn pink for the Save Lids to Save Lives® program in October at all participating retailers nationally. Yoplait® will donate 10 cents to Susan G. Komen for the Cure® for every pink lid sent in by December 31, 2010, up to $1.6 million, with a guaranteed donation of $500,000.

“Nearly everyone knows someone – wife, mother, sister, daughter, grandmother, aunt, cousin, friend – who has been impacted by breast cancer. That’s why it’s so important to raise awareness and offer support to those whose lives have been changed by this disease,” said Drew Jameson, Customer Promotions Marketing Manager at General Mills. “We honor and salute these women for their part in the fight against cancer.”

About Yoplait®
To date, Yoplait and its parent company General Mills have donated more than $25 million to the breast cancer cause. In addition to the Save Lids to Save Lives campaign, Yoplait is a member of Susan G. Komen for the Cure’s Million-Dollar Council and is the National Series Presenting Sponsor of the Komen Race for the Cure®, the largest series of 5K run and fitness walks in the world. Visit http://www.yoplait.com to get involved in the Save Lids to Save Lives program.