New Zentrip both prevents and quickly relieves the effects of motion sickness and its associated symptoms of dizziness with a tiny, easy-to-use medicated strip that dissolves in seconds on the tongue. 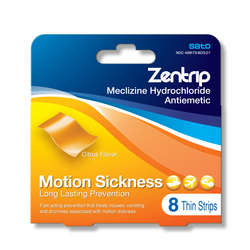 Tired of worrying about getting seasick or motion sickness in a car, plane or even when watching a 3-D movie? At one time or another, we all have been frustrated and unprepared for this untimely and uncomfortable event.

Seemingly striking out of nowhere, motion sickness affects millions annually, whether traveling by car, plane, bus, boat or participating in other leisure activities. So, it's no wonder scientists are always looking for a better idea in avoiding nausea and dizziness.

A novel solution is found in Zentrip, a new entry in the battle against motion-sickness.

The latest quick-fix comes in a unique delivery system: a fast-dissolving, fast-acting and pleasant tasting, citrus-flavored medicated thin-strip. Simply place the strip on your tongue for a few seconds. That's it. It works faster than you can say, "Ahh."

Think relaxing, no worry traveling after placing the Zentrip strip in your mouth. In only 15 seconds, this low-cost solution is working to prevent and ease the effects of motion sickness.

Motion sickness is often the result of slow movement or movement in two directions, such as back and forth and up and down, at the same time, much as fishermen have experienced. As many have found, severity of this experience can last for hours or up to several days.

Since long-lasting Zentrip comes in a tiny package of eight thin film-type strips, it's the most portable and easy-to-carry motion sickness remedy available for all aspects of motion sickness,
Including nausea, vomiting and dizziness.

Just store it in the car or carry it in your pocket when going fishing or traveling in a vehicle or plane.

Zentrip offers up to 8 hours of relief, much longer-lasting relief compared with liquids, pills, chewable tablets and other delivery systems.

Zentrip's main ingredient is Meclizine Hydrochloride, an antiemetic that works by blocking a chemical messenger in the brain, helping to reduce or prevent vomiting and other sensations associated with motion sickness, such as dizziness.

Because Meclizine is an antihistamine and anticholinergic, it should be taken only by adults and those over 12 years of age. Best results are found by taking the medication about one hour prior to traveling.

Zentrip strips, developed by Sato Pharmaceutical, have been found to cause less drowsiness than other motion sickness products containing the same amount of Meclizine.

Best of all, unlike pills or tablets, no water is required. This is especially important when taking a long trip.

Cost-effective Zentrip is found at Walgreens and other leading drugstores and supermarkets. Suggested retail price is $4.99 to $5.99.

Founded in 1915, Sato Pharmaceutical has long been an industry trend leader in creating healthy lifestyle self-medications.

For further information, visit http://www.zentripsato.com or the e-store at http://www.shop.sato-pharmaceutical.com.