Fastspot is an interactive design agency which has done work for a number of well-known clients from across the country. This company’s dedication to creativity & innovation has landed it in the 3rd position on 10 Best Design’s Best Web Design Firms of March 2013. 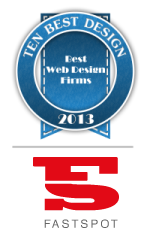 10 Best Design is considered to be among the top web design awards organizations.

Fastspot is a well-established agency located in Baltimore, Maryland. Their exemplary work in the field of web design has granted them the ranking of Third Best Web Design Firm of March 2013 according to 10 Best Design, a site which has grown to be one of the most prestigious ranking, reviews, and awards organizations for the web design industry.

10 Best Design was established some time ago by industry professionals who came to believe that the quality of websites being produced often failed to live up to the potential of the internet.

“The fact that many companies still build websites that look like they’re from the 90s doesn’t make any sense to us,” said a 10 Best Design representative. “We find companies who innovate and utilize modern technologies.”

Today, 10 Best Design is considered to be among the top web design awards organizations by many of the leaders in the web design industry.

Fastspot was identified as the #3 best design team because they know that staying ahead of their time is the only way to keep up. The websites that Fastspot produces are visually stunning, user-friendly, and incorporate cutting-edge technologies.

In fact, Fastspot has been winning awards since as early as 2006. Their accolades include ADDYs, Webbys, Pixel Awards.

For more information about Fastspot or to register your web design firm to the 10 Best Design awards, visit 10BestDesign.com.