Transfer of Power How to Safely Restore Power to Your Home

Hurricane Charley left nearly a million customers in the dark. Electric Generators Direct.com, an online emergency generator superstore, offers some valuable advice on how to safely restore power to your home with a portable generator.

Hurricane Charley is quickly teaching homeowners a valuable lesson about taking electricity for granted. The Category Four hurricane knocked out power to nearly a million homes in Florida, and many residents are still living without power. Homeowners are now using portable generators in record numbers to safely restore power to their homes. "Getting a generator is one thing," says Jon Hoch, founder of Electric Generators Direct.com (http://www.electricgeneratorsdirect.com). "Getting the electricity into the house is another."

First, most extension cords can't be plugged into a furnace, well pump or ceiling-light fixture. If the cords are too long, the resulting power drop may damage the generator and appliances. And if they are placed under rugs or carpets, heat can buildup and spark a fire. "Be sure to use appropriately sized power cords to carry the electric load," said Hoch. "Typically, the thicker the cord, the more electricity it can carry."

If you want to use extension cords, consider getting a Gen-Cord (http://www.electricgeneratorsdirect.com/catalog/accessories.php). You simply plug the all-weather cord into your 20- or 30-amp generator outlet and then run it inside. The plug on the inside splits into three 120-volt outlets, where you can plug in several household appliances or additional extension cords.

For safety's sake, Hoch recommends hiring a licensed electrician to install a power transfer system that redistributes power from the generator to the home's circuit box. The power transfer system (starting at $200) reduces the need for multiple extension cords running from the generator to specific appliances, and it eliminates the risk of electrical "back feed" injuring utility workers working on downed power lines.

It is installed beside the main electrical panel, and then it's connected to the circuits you'll want running during a blackout. When the power goes out, you simply crank up the generator and run a single power cord from it to a transfer switch. "Once the generator is running, you can choose which appliances and circuits you want to use by simply flipping the switches," said Hoch.

It's important to keep track of what's being powered, warns Hoch, because the transfer switch is often wired into more circuits than the generator can handle all at once. "A typical power transfer system installation will take less than two hours and cost around $100-$200," said Hoch. "But it's an investment that will be fully appreciated the next time the power goes out."

For more tips on how to pick the perfect emergency generator, visit http://www.electricgeneratorsdirect.com/catalog/pickperfect.php

For more tips on how to safely use a portable generator, visit http://www.electricgeneratorsdirect.com/catalog/transferofpower.php

How to Connect to a Manual Transfer SwitchSimply run a generator cord through a window or door to your manual transfer switch.

How to Connect a Power Transfer SystemSimply connect your generator cord to a power inlet box installed on the exterior of your home. 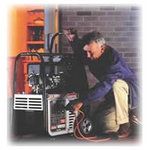