Flax Oil Creator Advises Hilary Swank and Jay Leno: Don't Drink It from the Bottle Â Pour Some on a Salad 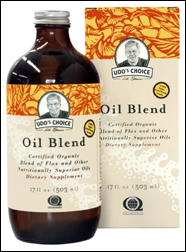 In a recent interview with Jay Leno, Oscar winner Hilary Swank prodded the Tonight Show host into taking a big swig of flax seed oil, one of the dietary supplements Swank said she used to pack on 19 pounds of lean muscle for her role in Million Dollar Baby. Leno, who apparently had never tasted flax oil, promptly gagged and spit it out.

"There aren't many who can drink flax oil straight from the bottle," said the supplement's creator, Udo Erasmus. "Ms Swank probably should have dribbled a few tablespoons on a salad and let Jay try it that way. That's how I take it."

Erasmus, known as "The Father of Flax" for creating the first commercially available organic flax oil in 1986, doesn't harbor any bad feelings at Leno's reaction to his supplement, commonly called "Udo's oil" by health enthusiasts and body builders.

"Flax oil's health benefits are so enormous that I'm just thankful it was mentioned on national television Â even though Leno called it a couple names our marketing people probably never thought of," says Erasmus.

Erasmus thinks Hilary Swank probably doesn't realize the tremendous positive influence she's having on the health of the entire country by talking publicly about her use of flax oil during her nine week training experience.

"To prepare for her part as a boxer, Hilary used flax oil the way most athletes and body builders do - to turn on the bodyÂs fat burning genes, increase energy and stamina, prevent joint discomfort, and enhance muscle development," says Erasmus. "But the nutrient in flax oil that does all those things, an essential fatty acid called Omega 3, also improves circulatory health, decreases risk of heart attacks, strokes, and prevents certain types of cancer."

"I'm hoping the more Ms Swank discusses her training regimen, the more people will be inspired to try flax oil supplements -- and this can only improve health all across America."

For those considering using flax oil either as a training aid or to enhance their general health, Erasmus offers these words of advice:

Â Essential fatty acids are easily destroyed by heat, light, and air, so make sure the flax supplement you purchase is packaged in a dark bottle to keep out air and light, and has been refrigerated both during the shipping process and while on the store shelf.

Â Because oils tend to leach toxic molecules from plastic, be sure your flax oil supplement is packaged in a glass bottle, preferably dark or opaque.

"Balanced flax oil is a supplement everyone should take everyday," says Erasmus, "but probably not directly from the bottle."

Udo Erasmus, Ph.D. and author of the best selling book "Fats That Heal Fats That Kill", has been researching and developing organic seed oil supplements for the health food industry since 1983. He developed the "Udo's Choice" line of organic dietary supplements for Flora, Inc., including his Omega 6-Omega 3 balanced "Udo's Choice Oil Blend".