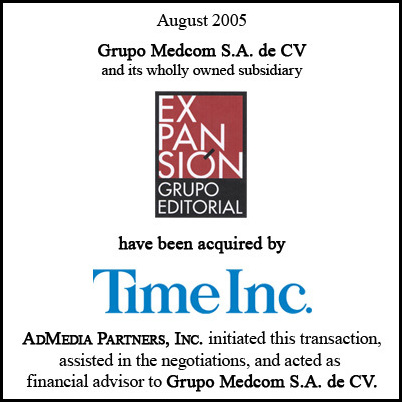 With international expansion a key element of our growth strategy, this is an ideal acquisition for us. Grupo Editorial Expansión is a terrific company with an impressive management team and world-class editorial products. This represents an exceptional opportunity to establish Time Inc. as a major presence in the dynamic Mexican magazine market.

The official release is as follows:

Time Inc. has acquired Grupo Editorial ExpansiÃ³n, it was announced today. Financial terms of the transaction were not disclosed.

Based in Mexico City, Grupo Editorial ExpansiÃ³n (GEE), the premier publisher of high-end consumer and business magazines in Mexico, was founded in 1966. Its portfolio of 15 titles include ExpansiÃ³n, GEE's flagship magazine and Mexico's leading business magazine, and Quien, a bi-weekly celebrity/personality magazine that carries more advertising pages than any other periodical in Mexico.

Other titles include Obras, Mexico's leading architecture, construction and engineering title; Life and Style, a monthly men's lifestyle magazine; and Balance, a fitness, health and nutrition magazine for women. GEE also has a thriving custom publishing business whose titles include Vuelo, the in-flight magazine for Mexicana Airlines, Mexico's largest national carrier, and Audi Magazine, published and distributed in Mexico for the auto manufacturer.

The combination of a robust and substantial economy -- the world's 12th largest -- and a rapidly emerging, well-educated middle class makes Mexico an attractive, vibrant and fast-growing magazine market.

Ann Moore, Chairman & CEO of Time Inc., said, "With international expansion a key element of our growth strategy, this is an ideal acquisition for us. Grupo Editorial ExpansiÃ³n is a terrific company with an impressive management team and world-class editorial products. This represents an exceptional opportunity to establish Time Inc. as a major presence in the dynamic Mexican magazine market."

Moore added, "Given the outstanding success that British publisher IPC (which we acquired in 2001) has enjoyed in the U.K. and Australia, we are confident in furthering our international expansion by acquiring GEE."

John Reuter, Chief Executive Officer of Grupo Editorial ExpansiÃ³n, said, "We're delighted and excited at the prospect of becoming part of Time Inc., the world's pre-eminent magazine publisher. Time Inc.'s outstanding record of success, reputation for excellence and immense resources will provide us with the ideal environment to continue to grow our business."

Grupo Editorial ExpansiÃ³n is currently owned by Editorial Medcom S.A. de C.V., a Mexican corporation, which bought it from the Walt Disney Company in 1993. Previously, GEE was owned by Chilton Publishing, which was acquired by Capital Cities prior to its merger with ABC.

Editorial Medcom's ownership is shared among the Serna family and La Caisse de Depot et de Placement du Quebec (a Canadian pension fund). The Serna family has a controlling interest in the company.

Time Inc. is the world's leading magazine publisher, publishing 140 titles that are read more than 300 million times worldwide on a monthly basis and account for nearly a quarter of the total advertising revenues of U.S. consumer magazines.

AdMedia Partners (http://www.AdMediaPartners.com) is a leading boutique investment bank that provides middle market mergers and acquisitions advisory services to media and publishing, advertising and marketing services, and related internet businesses. Founded in 1990 and located in New York City, the firm has completed over 100 transactions since 1999.

Transactions completed by AdMedia Partners in the last two months include: