Bird flu fears have spurre the US purchase of billions of dollars of a drugs to treat this suspected pandemic. Dr. Mercola, a leader in the wellness movement in the U.S. has uncovered that Defense Secretary Donald Rumsfeld will directly benefit from this purchase. 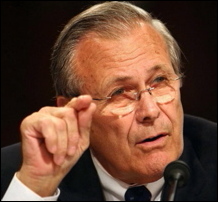 Last month President Bush stated that a minimum of 200,000 to a worst case scenario of 2 million deaths would occur in the US alone from the bird flu epidemic. This belief was used to justify the immediate purchase of 20 million doses of Tamiflu at $100 per dose which comes to a staggering $2 billion.

While administration officials believe drug therapy will help decrease the deaths in a bird flu pandemic, Dr. Mercola who is the founder of mercola.com the second most visited non-government health site after WebMD, states that, "Simple lifestyle changes can enhance your immune system to provide a virtual guarantee that you will not get the flu."

Unfortunately, lawmakers have already given Bush money to begin bird flu preparations. Last Thursday $8 billion in emergency funding was passed by the Senate which an amount considered close to what federal health officials believe they will need to apply a drug based solution to the projected bird flu pandemic.

Part of that money will be used to purchase a supply of the drug Tamiflu. Roche is the company that manufactures Tamiflu, but further investigations will show that the drug was actually developed by a company called Gilead which 10 years ago gave Roche the exclusive rights to market and sell Tamiflu.

The Rumsfeld Connection to Gilead

If you read Gilead’s website, you'll learn that Defense Secretary Donald Rumsfeld was named the chairman of Gilead in 1997.

According to CNN yesterday, he still holds a Gilead stake valued at between $5 million and $25 million and will handsomely profit from the scare tactics the government is currently using to justify the purchase of $2 billion of Tamiflu. Disclosure forms don't reveal the exact number of shares Rumsfeld owns, but in the past six months fears of a bird flu pandemic and the ensuing scramble for Tamiflu have sent Gilead's stock from $35 to $47. That's made the Pentagon chief, already one of the wealthiest members of the Bush cabinet, at least $1 million richer.

Last week's British Medical Journal has an editorial on the bird flu in which they state the following:

Dr. Mercola, a New York Times best selling author and founder of the most visited wellness health site in the world http://www.mercola.com/index.htm, stated:

“While it is possible the virus could mutate with the influenza A virus and to acquire the means for rapid human to human transmission, the bird flu virus clearly does NOT have this ability now. All the preparation and fear being created in the media is about a theoretical speculation.”

Fortunately there are simple and highly effective lifestyle changes that can radically reduce your risk of becoming infected with the bird flu. To receive your free report please go to http://www.mercola.com/birdflu.