Blizzard Blackout: How to Safely Weather a Winter Power Outage

Ice storms and blizzards can snap power lines as easily as any hurricane. Electric Generators Direct.com, an online emergency generator superstore, offers some good advice on how to weather a winter power outage.

Yet, many Americans in Northern States are still not prepared for a winter blackout.

Ice storms and blizzards can snap power lines just as easily as any hurricane, spawning prolonged power outages during the darkest days of the year.

Several years ago, his own mother and father endured a 4-day power outage, inspiring him to get them a backup generator and eventually launch an online generator store.

“Some homeowners physically cannot brave a blizzard and run out to rent a backup generator,” says Jon Hoch. “Therefore, the key to survival is early preparation.”

His father, Ron Hoch, chronicled the ordeal, illustrating what can go wrong during a blizzard blackout. For example, when the power went out, so did his electric-powered blower. So even though he had a natural gas furnace, it was rendered useless during the height of the blizzard.

In the past, the only option was going without electricity. Now, many homeowners are taking matters into their own hands by generating their own electricity with a standby or portable generator.

Standby Power (http://www.electricgeneratorsdirect.com/catalog/pickperfectstandby.php) If you want the convenience, security, and comfort of a generator but don't want to venture out in inclement weather to get it started, you should consider getting a standby generator.

The all-weather generators are installed outside like a central air conditioner and automatically start during a power outage, whether you're home or not.

Portable Power (http://www.electricgeneratorsdirect.com/catalog/pickperfectportable.php) If a standby generator is out of your price range, you can always convert a portable generator into an emergency backup power system.

Most mid-sized portable generators (starting around 5,000 watts) can restore power to essential appliances, including furnace fans and refrigerators, according to Hoch.

“You simply wheel the generator outside and run extension cords to the appliances that you want to power,” says Jon Hoch. “If you don’t want to deal with yards and yards of cords, you can use a power transfer system to safely restore power to your circuit panel.” 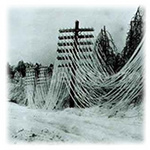 Blizzard BlackoutIce storms can snap powerlines as easily as any hurricane.

Standby PowerStandby generators automatically start when the power goes out, whether you're home or not.