The power of the internet helps to launch music career.

TJ Nelson, a country music recording artist from South Dakota, has released his debut CD on CDBaby. Living in a rural area makes promoting TJ's debut CD "It's a Country Thang" a major task. There are many miles between TJ and the music industry in Nashville, TN. but with the help of the internet and websites like http://www.cdbaby.com TJ is making his way all over the world.

When TJ decided to market his project on thw worldwide market, he had no idea there would be as much international response from radio dj's and fans in over 20 countries from australia to russia to european countries. " I have been getting a ton of emails from all over the world and I have been answering every one of them", TJ says.

TJ's record label, Phideaux Records, is very proud of the success of the CD so far and is patiently waiting to release the second CD from this very talented singer.

TJ is available for interviews or concert appearences. Contact Robin Knuckles of Junction Entertainment in Madison, TN or on the web at http://www.junctionentertainment.com 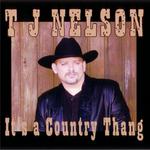