Petition sent to President Yudhoyono to Stop the Illegal Trade in Indonesian Wild Parrots and Cockatoos on Anniversary of his pledge on November 5, 2004 on National Wildlife and Animals Day.

A petition 305 pages long, and signed by citizens of 58 nations, is expected to be delivered to President Susilo Bambang Yudhoyono and Minister of Forestry Kaban of Indonesia this week. The petition asks the President to honor his pledge on National Wildlife and Animals Day, exactly one year ago, on November 5, 2004 (shortly after he was elected President of Indonesia), when he promised that the government of Indonesia would take "strong action" against wildlife smugglers and corrupt officials.

The petition focuses upon the spectacular cockatoos (such as the sulphur- and salmon-crested cockatoos), parrots, and lories (such as the purple-naped and red-and-blue lories) which are both unique to Indonesia and at risk of extinction. The petition requests that these birds (which it refers to as "harta karun Indonesia" or hidden treasures of Indonesia) be protected from all trapping, export, and sale at domestic bird markets. Furthermore, the petition requests that members of the Indonesian Military (TNI) no longer be allowed to take these birds as "oleh-oleh" (souvenirs) at the conclusion of tours of duty, and that severe penalties be given to government Conservation Officers who issue illegal permits, ignore quotas, or themselves perpetuate the illegal bird trade. The petition requests that Indonesian airlines be forbidden from transporting any wildlife protected by law (except where needed for veterinary care), a move which would partially cripple illegal trade across the broad archipelago but one previously refused by the airlines. It further asks that confiscated parrots be turned over to the Wild Animal Centers of Indonesia for rehabilitation, since experience has shown that government officials lack the expertise and facilities for such specialized work and that the mortality rate of birds held in government facilities is high.

In the accompanying cover letter to Minister of Forestry MS Kaban, the petitioner writes that

"If all the birds were to die, Indonesia would suffer from a great poverty

This petition was motivated, in part, by undercover investigations carried out in North and Central Maluku provinces (for example, Ternate and Seram) and West Papua by the non-governmental organization ProFauna Indonesia. These investigations exposed the brutality and high mortality of the trapping methods used to poach these parrots . They also revealed that the illegal trade in birds supposedly protected by both Indonesian and International law was nonetheless rampant, and sometimes was aided and abetted by government officials or the military itself. Indeed, almost exactly one year after President Yudhoyono's promise to fight the illegal wild animal trade and the corruption within the government which helps to sustain it, three high-ranking officials of the Conservation and Natural Resources Department were reported for alleged involvement in the illegal trade in protected animals by a network of wildlife protection groups following their one-year undercover operation which included videotape evidence [source: Abdul Khalik,The Jakarta Post, Oct. 15, 2005].

The petition was written and circulated by Dr. Stewart Metz, M.D., Director of Project Bird Watch and the Indonesian Parrot Project (http://www.indonesian-parrot-project.org; projectbirdwatch@att.net). This NGO, working with Yayasan Wallacea, receives cockatoos and parrots which have been confiscated by governmental officials from smugglers, for rehabilation on Seram Island in Central Maluku Province, Indonesia. 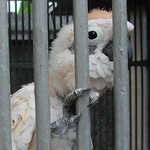