New conservation stamps and limited edition prints to raise much-needed funds to save the recently rediscovered Ivory-billed Woodpecker have been endorsed and signed by Arkansas Governor Mike Huckabee. The design for the new stamps & prints are from an original oil painting "Elusive Ivory" by wildlife artist Larry Chandler of Hartselle, Alabama.

The Ivory-billed Woodpecker made headlines worldwide after a press conference on its rediscovery April 28, 2005 at the U.S. Department of the Interior Auditorium in Washington, D.C. The last confirmed sighting of the bird, before the one in Eastern Arkansas in February 2004, is from the 1944, almost 60 years earlier. There is no doubt it's the rarest bird in all of North America.

The price range for all items offered by the Official Ivory-billed Woodpecker Conservation Stamp Print Program starts at $9.00 for a Cloisonne collector pin and go up to $315.00 for the special Search Team Edition print hand-signed by the artist and all 4 members of a search team who first observed the bird along the Cache River in what's called the Big Woods area of Eastern Arkansas.

For the average wildlife art lover, a Regular Series Print ($165) which includes a mint (unsigned) stamp will be the most popular. It is strongly suggested an extra artist-signed stamp ($17.50) also be purchased (with this or other print editions) and then have both mint

and artist-signed stamps framed below the print. This set makes a great conversation piece.

Many of the estimated 70 million bird watchers in the United States will want to visit Arkansas to see the bird. But, thanks to the Ivory-billed Woodpecker Conservation Stamp Print Program, they can see one on their wall without leaving home and their purchase will help to ensure this

rare bird will survive. The stamp print will be the perfect holiday gift for birders this year.

Wildlife artist Larry Chandler learned about the bird from his long-time friend Bobby Harrison, who along with Tim Gallagher, made the first confirmed sighting of the bird in almost 60 years. It was Harrison, Associate Professor at Oakwood College in Huntsville, Alabama, who told him he needed to do a painting of the bird. After being sworn to secrecy, "I had to be the hands of the eyes that had seen the vision", Chandler said. His design captured the grace of this bird.

For more information on the Ivory-billed Woodpecker Conservation Stamp Print Program, visit the web site for it at http://www.ivory-bill-woodpecker.com. 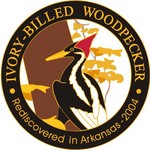 Poster of Ivory-bill Woodpecker ImagePoster bears the image of the stamp and the printed signatures of the four man search team.

Bobby Harrison and Ivory-bill DecoyThis hand craved Decoy by Pro. Bobby Harrison was used to lure the birds in close to film on video tape.

2006 Arkansas State Car TagThis Design will be the Official Conservation Car Tag for the State of Arkansas, also by Larry Chandler.