Jude Nutter of Edina, MN is the winner of the fourth annual War Poetry Contest sponsored by Winning Writers. This contest seeks today's best poetry on the theme of war. Ms. Nutter's poems, "Infidelity", "For Those Held Captive for Decades in Darkness" and "The Map" were judged the best of 1,036 entries from around the world. The winning entries are published at http://www.winningwriters.com/contests/war/2005/wa05_pastwinners.php. 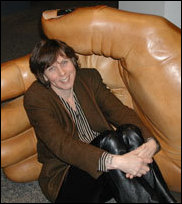 I knew Jude Nutter's poems would be our first-prize winners as soon as I read them. Her elegiac verses brim with tenderness and insight, offering hope to heal war's scars.

Winning Writers is pleased to announce the results from its fourth annual War Poetry Contest. Jude Nutter of Edina, MN won first prize and $1,500 for her poems, "Infidelity", "For Those Held Captive for Decades in Darkness" and "The Map".

1,036 entries were received from around the world. They were judged by Jendi Reiter, award-winning poet and author of A Talent for Sadness. Ms. Reiter comments, "I knew Jude Nutter's poems would be our first-prize winners as soon as I read them. Her elegiac verses brim with tenderness and insight, offering hope to heal war's scars."

Mr. T.P. Perrin of Binghamton, NY won second prize and $500 for "McVay" and "Thersites". Dr. Alan Farrell of Glasgow, VA won $250 for "Martyrdom of a Mutt". Ten honorable mention awards of $75 were also made, bringing the total awards to $3,000. All the winning entries are published at http://www.winningwriters.com/contests/war/2005/wa05_pastwinners.php

...After the first death there is no other.

When the hawk slaked down into the garden and entered

the chittering bud of linnets and sparrows

feeding on the bread crumbs and stale cereal, you

were telling me the story

of how you took it upon yourself to bury, as you would

in the weeks to come most of your own platoon, the young

German—the first man you ever killed—

shot on the concrete forecourt of a textile factory

in Belgium. At close range. With a single bullet.

I need to believe you spent the war

safe from yourself, in reserve, your rifle clean

and unfired; that you woke each morning

alone and hard in your own hand. But the tautness

purse of his mouth went slack and eased open

to reveal its neat, stained wreaths of change.

After the first death there were many others and they all

rose up through this one. Out in the garden the hawk

rowed up from the earth with its burden, leaving

a panic the colour of ashes and bone. A slim warmth

was caught in the fabric of his battle dress, there were twigs

and feathers of grass in his hair; and when you dragged

him the dark palm of the earth snagged

him by the heels and eased his boots off. But you were tired

and the grave so shallow and small his knees rose up

through the dirt. To shovel soil across his face, you said, dead

as he was, to throw dirt into the gape of his mouth and over

the pale noose of each iris was an act of infidelity

against your own humanity far worse

than squeezing the trigger. That night, laid out

beneath the empty looms of the factory, you dreamt

came you were ravenous for a woman. Not sex,

but the easy kindness that stands in attendance

whenever women are present. You are married, you said,

to the first man you ever kill, and then you went outside

to gather even the smallest feathers that had drifted

and caught against the hedge. Still, after sixty years,

the terrible competency of your hands. You spaced

those small feathers widely, like seeds, in the wet soil

stashed their silver among the fine hairs of your jacket.

A man, however well he lives, never lives

his life well enough to justify the harm he commits

with his own hands: he bent at the knees so slowly, you said,

then folded forward gently, with a sigh, like a woman's dress.

The War Poetry Contest is sponsored by Winning Writers. It seeks original, unpublished poems on the theme of war. Contestants are asked to submit 1-3 poems, up to 500 lines in all. Submissions for the 2006 contest are accepted from December 1, 2005 through May 31, 2006. Entries are accepted online and by mail. The entry fee is $12. For more information, please see http://www.winningwriters.com/contests/war/wa_guidelines.php

Please feel free to request additional information, to request permission to reprint poems, or to make arrangements for interviews with the contest winners.

Winning Writers was founded in 2001 by Jendi Reiter and Adam Cohen. Learn more at http://www.winningwriters.com/index.php

Jude NutterJude Nutter won first prize in the 2005 War Poetry Contest for "Infidelity", "For Those Held Captive for Decades in Darkness" and "The Map"