CompAmerica Claims Title to 'the Most Powerful Laptop on Earth!' -- the ORCA 9098 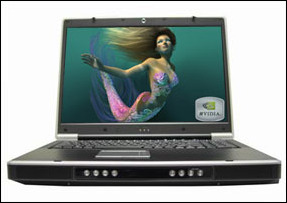 The world of exotic super laptops is a hotly contested field. Today, CompAmerica added on to the top end of its “exotics” with a new laptop for the very enthusiastic, and professional laptop user community, one with pizzazz, potency and performance, the ORCA 9098.

CompAmerica announced that its newest high-end ORCA Laptop will support the brand spanking new and more powerful NVIDIA 7800 GTX PCI-Express x16 Video Adapter, coupling it to 17” Glass-View UXGA and WSXGA+ Screen offerings. The laptop supports the INTEL Pentium 4 to 3.8GHz and 800 MHz Front Side Bus. I starts for around $2149.

Glass-View is a proprietary screen enhancement technology that brings LCD out of the “naked plastic digitally ragged” world of laptop screens into the “more professional, better for the eyes, better overall video” clarity that was formerly dominated by large plasma and high end flat CRT screens.

The new ORCA 9098 is designed with five primary markets in mind:

The company meets Microsoft’s new MCE 2005 Media Center by offering both a standard or Microsoft MPEG3 integrated TV Tuner with remote control built in and a choice of Windows XP (Home or Pro) or Media Center 2005 Edition Operating Systems. The system is also said to be Red Hat Linux compatible, according to CompAmerica’s “Lookout Mountain Workshop” which is devoting its time to certifying Linux and Unix to run on all CompAmerica products.

“We have taken the time to insure that this laptop has all the capabilities one would want with a wide screen workstation with LCD panel. We’ve even included a Subwoofer and four tweeter speakers, for maximum fidelity, and our famed Glass View screen, which uses special optical glass to eliminate digital artifacting. These artifacts are the key drawback LCDs can exhibit - as found on our competitors’ screens when they play back DVDs or HDTV input, these artifacts resemble crossword puzzles that mysteriously appear and disappear on the screen. Glass View eliminates much of the artifacting found on the average LCD panel, as well as smoothing the images so they are not as ‘ragged’. We have virtually eliminated digital artifacting, while also widening the viewing angle to nearly 170 degrees. That’s no small accomplishment. This clearly is the Mercedes of laptop computers!” stated CompAmerica’s CEO Dr. Jack A. Shulman.

Joe Davenport, an engineering consultant working in CompAmerica’s computer design center commented: “Modern desktop replacement laptops need to have balance, between their screens, CPUs, Hard Drives, Video, and Memory. Without balance, they just don’t deliver the goods. The ORCA 9000 series will support 2GB, soon 4GB of DDR2-4200 memory. It has the right CPU, the P4/800 front side bus with 2M L2 cache and 64 Bit Bus, EM64T. It has optional dual mobile SATA-150 hard drives, to take advantage of striping or mirroring depending upon whether you want max transfer rate or max data security. It supports dual DVDRW with Lightscribe in Dual format Dual layer mode. It offers MCE 2005 Media Center Edition from Microsoft with remote control and dual choices of TV Tuner. It has four tweeters and a subwoofer. It has external 8.1 channel audio. It has SPD/IF, USB 2.0 and Firewire as well as TV In and Out. Now that’s what I call balance!”

CompAmerica indicated that it would be offering DUAL CORE versions of the ORCA as soon as Intel’s chipsets for their form factor were ready and was delivering the 64 Bit version of Windows XP Professional “on an early release basis” awaiting additional software from Microsoft and other vendors to take even more advantage of the 64 Bit features of this new, more powerful version of Windows XP Professional, called X64.

“We are very pleased with the reception for the ORCA 9098, we’ve already sold out this week’s production without any advertisements. Along with the announcement of the new DOLPHIN 5720 Centrino Laptop with 17” screen and sleek exterior, which supports many of the features of the 9098 in a Mobil Pentium M platform, we believe we have exceeded any expectations of the market for the 2005 Holidays.” stated Shulman.

“We tailored the 9098’s capabilities to customer requests that we had for features they wanted. Those came from such diverse buyers as the Department of the Army, Northrup Grumman, Summit Brokerage, Solomon Schechter Schools, Doctors, Filmmakers and even Judges and Lawyers who wanted a Laptop whose screen they could see, one that wouldn't give them trouble, and which had maximum speed so they could get their work done. Speed also seems to smoothe out Windows behavior, taming it to deliver the load handling that power users demand.”

CompAmerica is an innovator in Laptops, PCs and Servers formed in the 1970’s. Founded by Industry Innovator Jack Shulman in 1970, CompAmerica first entered the PC industry in 1978 and opened its first store in 1985. The company is headquartered in New Jersey with assembly operations in California, Taiwan, New Jersey and New York. It maintains an all electronic web presence as well at the following locations on the internet.

The company has been leading the industry in first releases of new technology for many years. Known for long warranty, up to 4 years on these products, CompAmerica has a nearly non-existent return rate and a very small warranty rate, less than 8 systems in 2005. 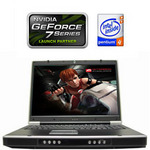 Details of the ORCA 9098An impressive computer that is both portable and powerful, the system is cooled by an exotic low noise copper cryo device. The advanced design makes proud ownership for the buyer, owning one of the very finest computers made anywhere in the world.

Left Side Detail of the ORCA 9098Truly awesome connectivity, this unit supports Gigabit Ethernet, and all this!