It will be Rose's second album of the year. He is joined by bassist Chris Alcaraz and drummer Randy Walker. The singer flaunts his outside-the-box timeless rock shock of unique style diversity - songwriting through the eyes of others, lavish tempered tunes of love and hope and stabs of reality. The album has a little punk, a little grunge and a lot of Rose.

Radio stations will receive copies of the CD November 15 through November 21, 2005.

Rose's band's innovation features unique punked out versions of a variety of rock melodies, hardcore electric punkrock and slow ballads. Rose brings a fresh change of style to listeners who are tired of the same old competitive sound in music. His deep bone chilling vocals provide an amazing complement to his off the mainstream groove of songwriting techniques.

Alcaraz's distinctive talent creates a high-spirited energy for the band's sound, and Walker's progressive percussion beats drive the band's sound to an extreme, rock grinding edge. Together, they create one of the most influential, refreshing sounds of the decade.

The Poison Butterfly LP is fully loaded with all of the powerful dynamics that make a great record. 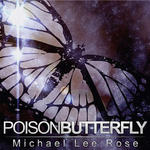