Jennifer Edison To Pre-Release Her New Album On CDBaby.com

Quickly gaining recognition in the music industry and among music consumers, Jennifer Edison’s new album “A Thousand Wings” is being pre-released on CDBaby.com for purchase all over the world. Blending together elements of R&B, Pop and Hip Hop “A Thousand Wings” has a crossover appeal that should prove a big success on the #1 Online CD retailer for independent music. 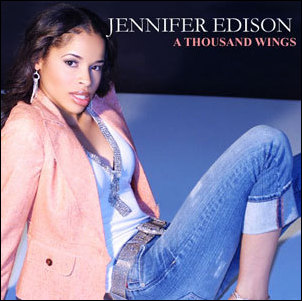 This album is the real deal

The time has come as the Detroit-based singer-songwriter and producer, Jennifer Edison, has now pre-released her new album “A Thousand Wings” on CDBaby.com, the largest online retailer for independent music. The album was produced by herself and her older brother Charles Edison and also features songs by Houston-based producer Derrick “Platinum Child” Hines.

“This album is the real deal,” Jennifer says. “And I am not very quick to say that about anything especially something that I did, but I am just overwhelmed with this project and eager to share it with the world.”

“A Thousand Wings” is a journey from Jennifer Edison, one that takes its listeners through the good, the bad and the ugly of life and relationships using a dynamic range of melodies both musically and vocally. She explores the depths of R&B music with elements of Pop, and Hip-Hop and meticulously combines them together to form her classic R&B sound. The first single to be released, I’m Out, combines a Hip Hop beat with R&B/Pop vocals and is playing on radio stations in the Southeast and spreading throughout the country and abroad. The record has been distributed to DJ record pools across the country and based on an early response from DJs, it will surely make an impact on the street level. The sweet harmonies of the tear-jerking Acapella track, No Matter What, caps off the album and pays special tribute to the soldiers and all of the heroes of the world inspiring those who go through trying times to keep fighting and never give up no matter what.

“Inspiration is so important to me and being able to inspire others through music is the greatest gift that I can give,” Jennifer affirms. “That’s what I try to do with my music. I want to give back inspiration to the world the way the people of the world have inspired me, from musicians to doctors, fireman, soldiers, teachers and everyone out there striving to make a difference in this world. I want to inspire people with my music and make a difference in the lives of those that hear it.”

“A Thousand Wings” is Jennifer’s second CD, following up on her debut Internet only release “JLE That’s Me”, which garnered a nomination for Best R&B Album of The Year by the Los Angeles Music Awards and recruited fans from the United States to Japan, Germany, Switzerland, Europe and the United Kingdom. The strong reviews and encouragement from the first CD provided the impetus for the even more ambitious follow-up.

“I’m definitely ready to take it to that next level. I love what I do and my greatest joy would be to share it with the world.”

About The Song of Songs Records:

The Song of Songs Records is an independent record label based in Detroit, Michigan specializing in the release of R&B and Pop artists. For more information and updates visit her website at http://www.JenniferEdison.com.

CD Baby is the largest online record store that sells CDs by independent musicians. Started in 1997 CDBaby has sold over $25 million in independent CDs to music fans around the world and boasts an impressive $19.9 million paid to artists. For more information visit http://www.cdbaby.com

To purchase the Jennifer Edison “A Thousand Wings” album visit http://www.CDBaby.com
or http://www.JenniferEdison.com for more information

The Song of Songs Records