born New York Hip Hop Artist known as “Shakka” is angry about the prevalence of fatal child abuse in the United States. Shakka (pronounced Shock-uh) is so fired up about child abuse and fatal child abuse that he’s pledged to inspire his fellow artists and performers in the music industry to use their talents to create awareness about this largely ignored and under-reported national tragedy.

His just released CD “Shakkamusic.com Presents T.S.C.A.P. The Shakka Child Abuse Project” deals with the personal, family, and community suffering and impacts of child abuse. The new CD features six artists performing eight Pop, Rap, and R&B songs. Some of the hit songs featured are: Where for Art Thou (lead vocals Farai), produced by Cali; Tell a Kid Why (features vocal diva Princess Tessa and Nicky Cole) produced by Haitian Frank; Twinkle Twinkle (features Sherry) produced by Godly; Not One More (video and album version produced by Prime); Where Were We At (features Rasheeda Wallace) produced by Godly; Find the Words (features Elan) produced by Ginx. All of the proceeds from the sale of the CD will go to raising awareness of child abuse. The CD is available for $16 online at http://www.cdbaby.com/cd/shakka7

T.S.C.A.P. is an artistic effort to bring various artists in the music industry together to create the awareness that may one day help to eradicate child abuse. A. Shakka Angrum, the 29 year-old-known as “Shakka,” who many say bears an uncanny resemblance to the late Tupac Shakur in his vocal delivery, is the Project’s founder and director. With eight independent label CDs to his credit, Shakka felt that it was time for him to do something with his talents that would raise public awareness in order to make a difference in people’s lives.

Shakka says his aim is to make as much “creative noise” from the talent at his disposal (concerned producers, artists, cinematographers, singers, dancers, writers, filmmakers) to bring about public awareness of child abuse and fatal child abuse. With all the realistic vision and pragmatism of a CEO, the 29-year-old Shakka says, "Once we have people really aware, we can get them to focus. Once their focus is on child abuse and fatal child abuse, we can then get them to take direct action. It's the only thing that can lead to the final and continuous goal of the T.S.C.A.P. project, which is prevention.”

Shakka adds, “Look forward to some incredible talent to be featured throughout this project. We’ll have new talent alongside some big names. We’ll be having small club benefit performances, large multi-performer benefit concerts, compilation CDs and videos with several performers collaborating.” Formerly one of the most popular regular performers at Nell’s, a nightclub in lower Manhattan, Shakka has gone on to record eight independent label CDs that are selling briskly on CD Baby to a fan base stretching from Brooklyn to Japan and Southeast Asia.

According to Publicist Pamela Riley, “Shakka is the most socially relevant artist coming out of the Hip Hop community since Tupak Shakur.” Adds Shakka, “Fatal child abuse is a sickness our society should no longer tolerate. The fact that we allow it to reoccur again and again is a testimony to the fact that we measure our progress by technological innovation as opposed to social advancement. Until every child on this planet is safe from the bestial aspects of human nature, we've made no progress whatsoever."

To learn more about Shakka, the T.S.C.A.P. project, and his newly released CD, visit his Web site at http://www.shakkamusic.com/tscap.html . The Web site has two free downloadable songs: Twinkle, Twinkle and Where Were We At. Artists, community groups, or businesses wishing to participate in The Shakka Child Abuse Project, should contact Shakka Music at (212) 946-1445. To arrange an interview with Shakka, contact Pamela Riley at (614) 937-1886. 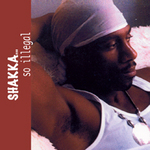 Shakka Sheds an Eternal Tear for Victims of Child Abuse and Fatal Child Abuse.Shakka's tatoo is an eternal tear in memory of the children who have suffered/died of child abuse.

studio picShakka in his apartment wearing a black leather jacket.

New York Rapper ShakkaShakka: The man behind the music.