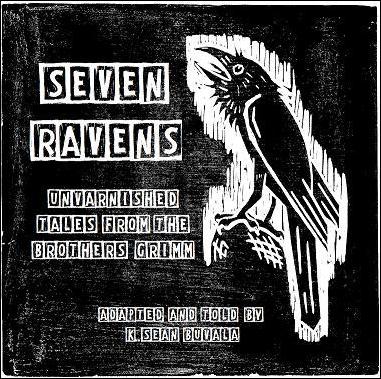 “Folks who want to explore folktales that haven't been 'cleaned up' will really appreciate this CD,” said Buvala. “The Grimm Brothers were collectors of folklore, not the con men they are portrayed as in the movie. The Grimms really intended to preserve the heritage of the people, and with that comes all the fullness of their images of life, death, religion, consequence, and reward.”

Dusting off some familiar and other more obscure fairy tales, Buvala tells eight Brothers Grimm fairy tales without the burden of “being nice” that plague so many modern versions. Fairy tales included on the CD are:

“The tales are brilliant in and of themselves. Now that the movie is heading for DVD, I thought it might be fun to share the real Brothers Grimm with folks,” said Buvala. “They'll enjoy learning the real versions of some of the fairy tales after they’ve seen the movie."

To order “Seven Ravens: Unvarnished Tales from the Brothers Grimm” or to listen to the story “Two Farthings” online for free, visit http://www.UnvarnishedTales.com or call 623-298-4548. This CD is intended for adult listeners and children age 10 and up.

Well-traveled throughout the United States, K. Sean Buvala has been presenting workshops, performances, retreats, consultations, and training for schools, libraries, churches, and corporations since 1985. Specializing in creativity and the art of storytelling, Buvala has trained and presented events for thousands of teens and adults throughout the United States. Buvala is a full-time, experienced consultant on storytelling and the Brothers Grimm for the press, television, and radio, and a trainer and coach for storytellers (both traditional and digital), performing artists, business speakers, and educators. All of Buvala’s CDs are available at http://www.StorytellingProducts.com.