New Satellite Images of 76 Major United States Cities and Their Environments at Geology.com

Satellite images showing the detail and environment of 76 major US Cities are available for viewing at Geology.com. These images provide a colorful view of city geography along with important vegetation, landscape, geological and land-use features of the surrounding environment. 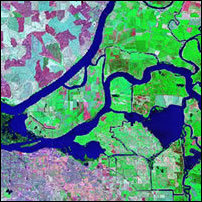 High-resolution Landsat satellite images for seventy-six major cities can be viewed online at Geology.com. Just click on a thumbnail image and a colorful high-resolution scene of the city and surrounding environment will fill your monitor. A Landsat viewing tutorial is provided for those who are new to Landsat images. The images will be of interest to geologists, city and regional planners, geographers, students and teachers. These new images will also be interesting viewing for anyone who enjoys spectacular views of cities or Earth's surface.

"Satellite images are one of the highlights of Geology.com. We know that many people want to see and study the geography and geology of where they live, work and play," says Geology.com owner Hobart King.

Geology.com serves as a portal to geology and earth science information across the Web. It provides resources for learning about geology and is visited by over 100,000 teachers, students and geologists each month.