Skiing, Skating and Other Winter Sports Call for Special Care of Skin and Feet

Fitness enthusiasts of all ages refuse to hibernate in the winter, which is particularly hard on skin, feet and ankles when the combination of lower temperatures and reduced humidity extracts moisture directly from skin. To beat dry, flaky or cracked heels and enhance the appearance of toenails, podiatrists recommend natural foot care products from Xenna Corporation.

Fitness enthusiasts of all ages refuse to hibernate during the winter. Besides the benefits of keeping in shape and being outdoors regardless of the temperature, there's a certain added romance to winter sports such as snow skiing or figure skating - or even just walking outside in a gentle snowfall. However, winter is particularly hard on skin, feet and ankles. In winter, the combination of lower temperatures and reduced humidity extracts moisture directly from skin, almost doubling the incidence of dry skin in winter compared to summer. In addition, muscles take longer to warm up when it's cold, making skiers, snowboarders and other winter sports buffs more prone to foot and ankle injuries.

Podiatrists say proper footwear for activities such as skiing or walking is extremely important, and that proper care must be taken to prevent blisters which can be caused by wet socks. They advise choosing footwear carefully, trying on a number of models and wearing them around the shop whenever possible. For outdoor winter activities, it's important to keep feet dry, but moisturized. Since dry, flaky or cracked heels are common, many podiatrists recommend CalleX® Dry Heel Ointment from Xenna Corporation, a distributor of natural foot care products. According to Dr. David Tsui, Chapel Hill, NC, "CalleX Ointment works very well. I have used it on my patients and on myself." CalleX is also being used and recommended by spas around the country. Michele Harper, Director of SheaSpa, says "I suffer from dry feet in the winter and I definitely notice a long term difference since I have used CalleX."

The natural enzymes found in CalleX Dry Heel Ointment exfoliate thickened skin areas naturally, while moisturizing and rejuvenating dry, cracked heels. Newly patented, CalleX has been shown in consumer studies to significantly reduce thick, dry, flaking skin and cracking on soles and heels within 15 to 30 days. Acid-free, diabetic-friendly CalleX moisturizes dry, rough or flaky skin, and exfoliates and thins thick areas, while leaving normal skin unaffected. Many nail salons use CalleX Ointment for both hands and feet as part of a manicure and pedicure, and most users see results on rough cuticles overnight.

Another winter sport becoming increasingly popular with brave souls of all ages is ice swimming, which dates back to Roman times. "Polar Bear" clubs are scattered throughout the country, mostly in colder climates including Colorado, Montana, New York, Illinois and New Hampshire. New York's Coney Island Polar Bear Club, founded in 1903, is the oldest such club in the nation and is the official registrar for cold-water swimming in the U.S. Rooted in the European tradition of saunas and cold water bathing, its proponents point to health benefits they believe they gain from taking icy dips, including the fact that medical studies have proven ice swimming makes the hypothalamus release beta-endorphines which cause the feeling of well-being. It is also believed by some to "supercharge" the system, improve breathing and muscle tone, increase circulation, decrease fatigue, improve thyroid function and skin tone.

Xenna's CEO C.J. Buck, says, "Ice swimming is not for everyone, and certainly not for the faint of heart (or for me!)" adding, "I hear from many individuals who are so embarrassed by the way their feet and toenails look they won't even go to the pool or beach in the summer." Buck says many people with yellow or discolored toenails avoid any activity that exposes their bare feet, including swimming, preferring to live with restrictions on their activities or shoe styles rather than deal with the embarrassment of exposing their bare feet. Buck says, "Unfortunately, the older we get, the more likely we are to have unattractive toenails or dry, rough skin on our feet - and that's when maintaining a regular exercise routine is more important than ever." Xenna's patented NonyX® Nail Gel offers a unique, natural approach to improving the appearance of yellow or discolored nails.

Buck says, "NonyX Gel is a topical, easy-to-use gel that breaks down and removes keratin debris - the off-white, granular buildup under nails which is the actual source of nail discoloration. It softens keratin debris using natural ethanoic acid, and permits it to be scraped out from under the nail beginningl after about four weeks."

NonyX Nail Gel can be purchased in the footcare section of Walgreens, Rite Aid, Longs, Drug Emporium, Brooks, Duane Reade, Eckerd and many Medicine Shoppe drugstores. It is also available at HEB, Roundy's and Brookshire grocery stores, through podiatric physicians, independent pharmacies and online at http://www.drugstore.com, http://www.FootSmart.com and http://www.xenna.com. 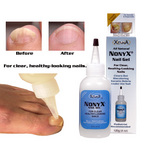