CelebPoker.com was in attendance at the 2005 American Music Awards show providing the Texas Hold’em action. The cards and chips were dealt backstage with celebrities and entertainers online and at the CelebPoker tables. 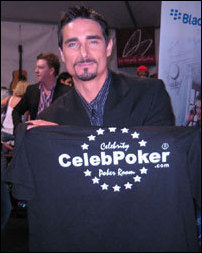 What happens when today’s hottest celebrities and entertainers decide to take some time off and let their cards do the talking? Well the answers were found in all sorts of fashions at the 2005 American Music Awards show in Los Angeles. CelebPoker.com, as always, was there to provide the celebrity poker game to the attendees of the massive event. The AMA’s was a huge show with big names. The result was a great night of music, comedy and backstage poker games with performers of all genres.

The day before a major awards show is a wild time. There are rehearsals, stag crews and general chaos. While there are a numbers of leisure diversions for the presenters and music acts one activity that always is popular is the celebrity poker games. CelebPoker.com is such a favourite in Hollywood due the exciting online system and star treatment received by all players. When the tents and stage go up so does the poker table. On the felt, cards and chips is the name that has become synonymous with US and global stars and Poker, CelebPoker.com

To start things off in the right direction the poker tables were set up as well as an online game. CelebPoker was there to give poker lessons, share strategy and deal the cards all week for the show. While there is always a huge spread of poker knowledge and experience among the celebrities, there are always surprises and all out bluffs during the course of each CelebPoker event. Entertainers such as Carlos Santana and new country act Sugarland took some lessons online and in person on the new CelebPoker system and likewise received a special gift to further their poker careers with.

When it came time to get the poker really going there was this year hottest western band, Rascal Flatts to seriously make a game happen. The boys in demand were not shy to boast about their play and then back it up at the tables among each other. This was a great time for spectators and the band themselves. At the end of the game there were lots of laughs and a few cards hitting the table hard. At each CelebPoker event there are sure to be today’s hottest celebrities playing poker and taking names. This years American Music Awards was no exception.

Switching genres was the next poker battle featuring the All-American Rejects. While each member in the band was getting in to the groove the action escalated quickly with 2 all in bets on the very first hand. This turned out to be a wild game as front man Tyson caught a straight flush on the river. At this time the volume level and the crowd nearby had made their way over to the table to see what was happening. The poker continued and the game got wilder. There were hand gestures, trash talking and all out bluffs as the All-American Rejects made their presence known with their cards and their guitars at this years event.

After presenting an award, the infamous Backstreet Boys were in the house to sign a poker chip set and get hands on with the system. The entire band spent several minutes talking about their games together, their poker experiences and who is the top player among the group. This proved to be quite a heated debate but after some laughs the general consensus was Nick Carter taking the title. After that it was time to put Nick to the test online. Right there at the AMA’s the game was on. Jumping on to a low limit table Nick proved to be a real player. Not loosing one hand while playing Carter called an All-In bet with nothing and bluffed a massive pot. The player folding couldn’t believe his eyes and had to have felt sick seeing Carters boldly played 10-3 off suit. Once again Nick was sent home with a CelebPoker.com shirt and the experience of battling poker players everywhere online. CelebPoker is the only place where a celebrity poker game can be found, sometimes at the most exciting events and shows world wide.

At the end of the show there were over 50 of today’s biggest and most well known celebrity entertainers leaving with CelebPoker shirts, hats, gift vouchers and software packages. In the busy lifestyle and touring, celebrities have a hard time finding a couple hours to play poker. What CelebPoker.com does is give player of all walks of life a place to play poker online that looks and feels like a true card room. Lindsay Lohan complained that she needed more time to play, and like many of today’s stars the internet is the only place to find the right game at the right time. CelebPoker.com is celebrities, poker and top entertainment. This years American Music Awards was a great show and a wonderful production. Adding top quality poker into the mix was just the right fit to cap off an amazing event.