Secret Tips to Avoid the Flu This Winter

Most people believe that you catch the flu from contact with other people who already have it. This is a common misconception, according to Dr. Joseph Mercola, who discusses the true origin of influenza (including the bird flu) and offers tips to avoid getting the flu virus. 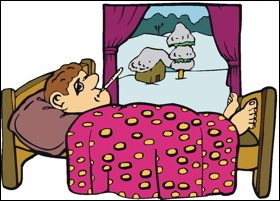 There is a preponderance of evidence suggesting that decreased sun exposure and subsequently lower vitamin D levels are closely related to your risk of acquiring the flu.

True or false? People catch the flu from contact with others who are already infected with the flu virus. According to Dr. Joseph Mercola, founder of Mercola.com, the world’s most visited natural health website, this is false. Dr. Mercola states that, contrary to popular belief, the real cause of the flu - even the so-called bird flu - is even simpler: not enough sunlight. He has just released a free 11-page report discussing this little-known but true cause of influenza, along with specific ways for people to protect themselves and their family from getting the flu -- without resorting to dangerous drugs or vaccines.

Dr. Mercola, a medical physician and New York Times bestselling author, states that the science of epidemiology does not support the widely-held theory that influenza is spread between people just like diseases such as measles. He notes that even one of the CDC’s own researchers, Dr. Carolyn Buxton Bridges, published a review on the transmission of influenza that could find no human experimental studies supporting this theory.

Instead, Dr. Mercola points to the work of R. Edward Hope-Simpson. One of the world’s pioneering epidemiologists, Hope-Simpson was the researcher who discovered that shingles was caused by a reactivated chickenpox virus. In 1979, he turned his attention to the influenza A virus. His research findings led him to believe that the flu virus was not primarily spread by transmission from actively infected to well individuals.

Hope-Simpson’s studies led him to conclude instead that influenza is distinctively seasonal. People are more apt to get influenza in the winter or with decreased sun exposure.

Accordingly, Dr. Mercola states: “There is a preponderance of evidence suggesting that decreased sun exposure and subsequently lower vitamin D levels are closely related to your risk of acquiring the flu.” Vitamin D has a profound effect on one's immune system, and is therefore involved in the epidemiology of influenza.

Dr. Mercola, author of the popular wellness guide Total Health Program, recommends a vitamin D supplement during the winter, in the form of a high quality cod liver oil that contains beneficial omega-3 fatty acids. In his free report, he also tells people which foods to add to their diet, which foods to avoid, and lists four other specific ways people can reduce their risk of catching the flu.

Although the Bush Administration is expecting an influenza pandemic this winter, no one should panic just yet. Dr. Mercola recently discussed how Bush’s prediction that up to 2 million people will die from this purported avian flu pandemic is a hoax perpetrated for the financial gain of his political crony Donald Rumsfeld. However flimsy his justification, President Bush is preparing for this bird flu pandemic with a $7.1 billion emergency plan. This includes $1.2 billion for 20 million doses of an experimental vaccine for H5N1 bird flu and $2.8 billion to speed development of new flu vaccines.

According to Dr. Mercola, flu vaccines are ineffective -- even in populations for which they have been highly promoted, such as the elderly or those with cystic fibrosis or asthma. Additionally, Dr. Mercola has long warned his patients that vaccines can do more harm than good, largely because of their “toxic cocktail” of ingredients. In his report, he discusses six common questions about flu shots and why everyone should know the right answers in order to protect their health.

Dr. Mercola has written an in-depth article detailing the true origin of influenza and the real truth about the avian or bird flu. This article can be accessed immediately by clicking on this link. The report also offers readers specific tips to avoid the flu and protect their own health and that of their loved ones.