Tactile 3D, an immersive 3D user interface for your desktop computer, is now available with an additional world environment. The new theme, called Wired, transports you into a functional cyberspace realm that, until now, existed only in the science fiction of Hollywood. 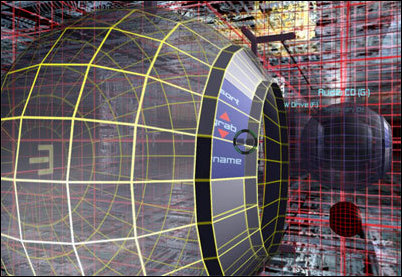 The Wired theme for Tactile 3D is the epitome of cyberspace. The new environment blends wire-frame folder and drive containers with innovative file models that accurately represent their content. In addition to looking impressive the interface offers abilities not normally found in traditional file explorers. All objects may be user-placed in the 3D environment. The positions, and other information like what arrangement sorted objects take, are stored on a per-directory basis. Music tracks, pictures, and other content on both read-only media (CDs/DVDs) and hard drives can be organized by the user. The organization is remembered for each disc or folder separately. This allows, for example, favourite tracks to be "placed to the side" for easy identification next time.

Other benefits include a copy/move stack that allows multiple selections of files to be held simultaneously, thus reducing the time needed to organize your file system. Casey O'Brien, the art director at Upper Bounds Interactive, explains the situation.

"Part of the challenge we face with this product is the assumption that because it looks good it isn't functional. In fact there are features of this software that make it more useful and practical than traditional 2D file explorers. One example is the ability to cycle through photo thumbnails without launching a separate viewer. Another is the hot-key system that allows you to instantaneously jump from one location on your hard drive to another."

The list goes on: easy visual identification of recently modified, read-only, and hidden files; a sleep mode that gives other processes all the CPU they need when Tactile 3D doesn't have focus; and a quick-select mode that allows partial file names to be entered.

Upper Bounds has a clear short-term goal now that the Wired theme has been released: to better communicate how to use Tactile 3D effectively. A large part of the development cycle was spent making Tactile 3D a functional tool. This needs to be reflected in supporting documentation, tutorials, and demos.

Upper Bounds Interactive invites you to try the Tactile 3D interface by downloading it from http://www.tactile3d.com. The minimalist Orbis theme may be tried on an evaluation basis. The site also showcases additional screen-shots of the new Wired theme.

Upper Bounds Interactive Inc. is a privately owned software development company based in Vancouver, BC. The development team consists of software engineers and artists with a long and varied history in the console and PC video game industry. The Company was formed for the sole purpose of developing and publishing Tactile 3D and remains focused on that goal.

Screen Shot 6This sort corner allows you to sort by different file attributes.

Screen Shot 4An mp3 music track as represented in the Wired theme.

Screen Shot 5Archives like zip files look like a vice. This screen shot shows one being renamed.

Screen Shot 1A network drive as seen from within Tactile 3D.

Screen Shot 3This sort corner allows the shape of the sorted files to be modified.

Screen Shot 7Thumbnails of file content get mapped onto the surfaces of the models.

Screen Shot 8An executable file as seen while using the original Orbis theme.